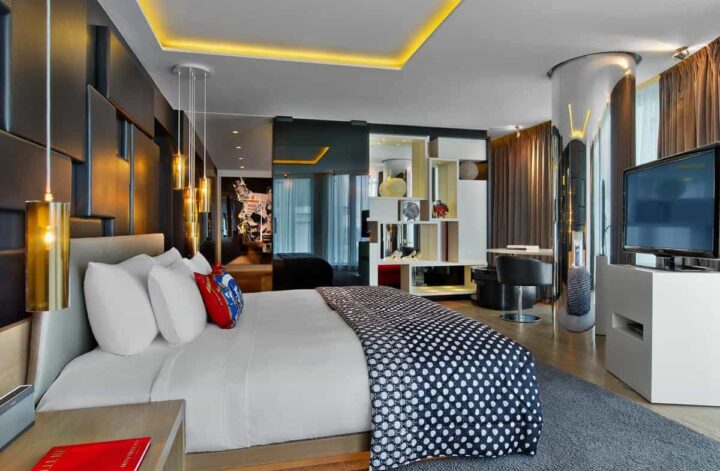 Heading to the city for a London theatre break and looking for London Soho hotels? Well, this post is for you.

London Soho is one of those places that is just lively, whether you are in London to let your hair down and dance your cares away, then Soho is where it’s at with many bars and clubs shake your tail feather.

If you visiting London for a little retail therapy then Soho is the best place to stay as you have Oxford Street, Bond Street, Marble Arch and Regents Street aka London’s shopping mecca with not only the likes of Primark but you have Gucci, Louis  Vuitton, Burberry, Selfridges Department Store all within a square mile.

You can swipe away your plastic during the day until you are content and then spend the evening all glammed up at one of the many theatres, after all you are right in the heart of the London theatre district.

To check theatre ticket deals available for shows in London, check out sites like Love Theatre, London Theatre Direct or Westend Theatre Breaks. Below you will find some of a list of cool London hotels in Soho.

This is an amazing and lively part of London known for its nightlife, shopping, variety of dining options and of course the London theatres.

Theatre-goers head to Shaftesbury Avenue, while shoppers bustle around Carnaby, Oxford and Regent streets and the iconic Liberty’s.

The energetic streets of Soho,  includes Dean, Frith, Beak, and Old Compton streets which are all part of the epicentre of activity day and night. London Soho is where you will find and long-running Ronnie Scott’s Jazz Club.

Map Of Soho In London

Below is a map of London Soho, where it starts and ends.

Whether you are heading to London for the theatre or shopping, London Soho hotels offer one of the best locations to stay in London as you have plenty of tourist attractions near by.

You have London Trafalgar Square, Covent Garden, Buckingham Palace, Embarkment, all within a short walk to many of London Soho hotels below. Below you hotels around Soho London.

1. Z Hotels London Soho
If you are looking for budget or cheap hotels near Soho London, this beautiful hotel offers resident caretaking service is located in London and 200 m from Carnaby Street and Kingly Court.

With free Wi-Fi, all its rooms have a desk, an AC and a flat screen TV set, private bathroom with a shower area, toilet essentials and hairdryer. Enjoy your breakfast with lip-smacking delicious Continental dishes. All the front desk executives speak Spanish in addition to English for your convenience.

Local places of interest include Shaftesbury Avenue, Prince Edward Theatre and Piccadilly Circus, Queen’s Theatre. The London City Airport is the nearest one. Shopping, parks, historical places are not too far away for the tourists. 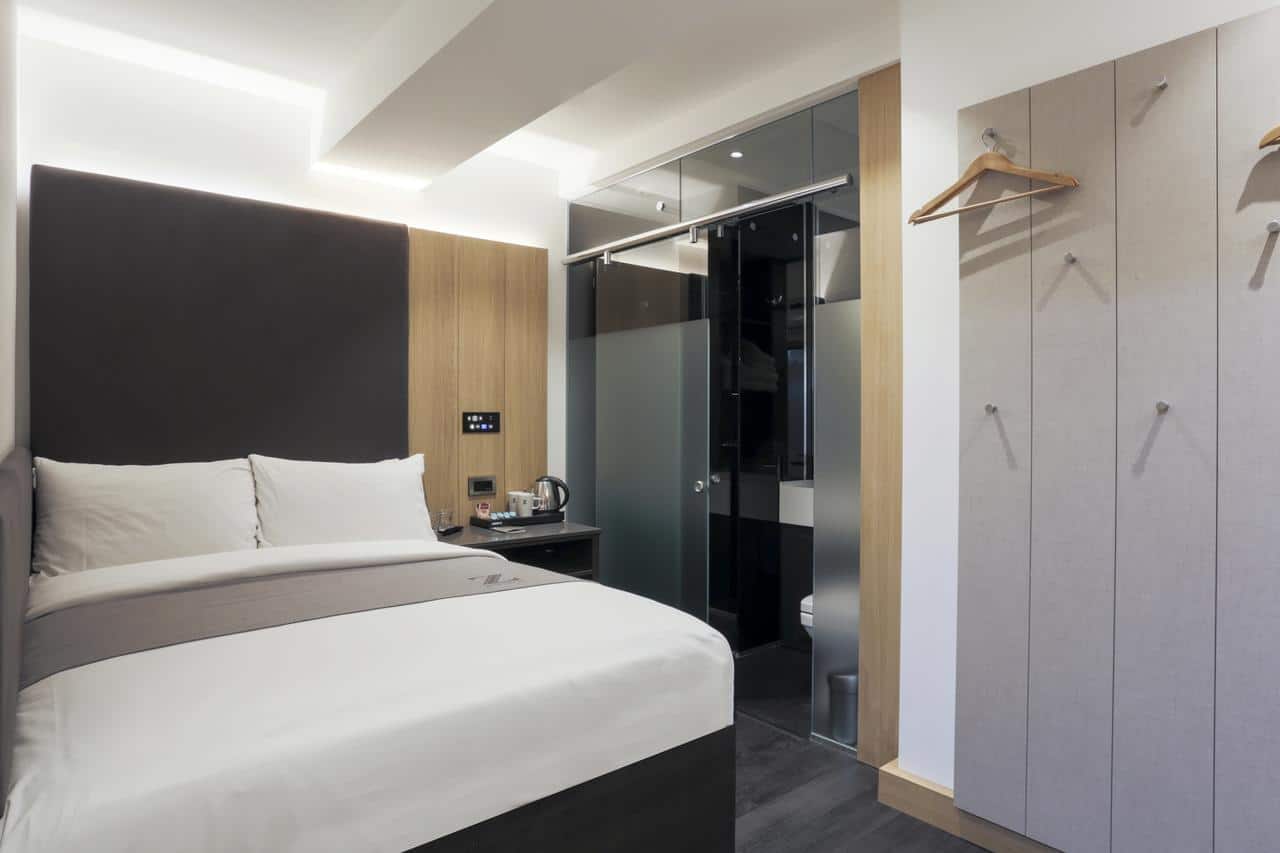 2. The Z Hotel Soho
Another of the cool hotels around Soho London, the hotel provides a closely packed but comfortable stay with modern amenities like handcrafted beds, Samsung HD TV airing sports and movies, free Wi-Fi, a walk in wardrobe, complimentary toilet essentials.

Rooms have accessibility via wheelchairs too. A variety of Continental dishes are served for breakfast such as smoked salmon, cereals, fresh fruits, croissants, apart from selected sandwiches, snacks and salads available during any time of the day.

One of the best hotels in Soho London connected to underground stations, a theatre and a jazz club, the hotel is also a neighbourhood of shopper’s paradise. Piccadilly Circus, Leicester Square and Convent Garden are just a 5-minute walk from the hotel. 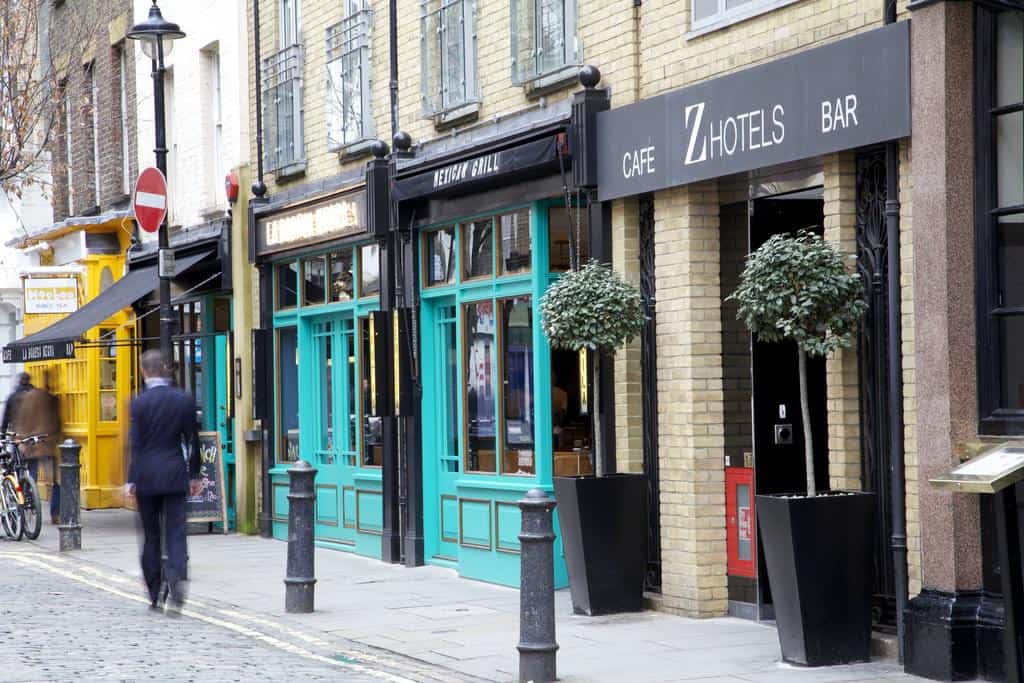 3. Mimi’s Hotel Soho
Hotels in Soho London area don’t get any better in terms of location. Mimi’s Hotel Soho is at a prime location in central London. Their rooms are cosy with an air conditioner, a flat screen TV with satellite channels, an exclusive bath, free Wi-Fi.

They have an on-site bar too. The hotel provides 24/7 front desk assistance and multiple restaurants, pubs and bars are within a walking distance.

Mimi’s Hotel provides a bike hire facility to the nearby places of importance like Old Crompton Street, Charing Cross road, shopping centres, parks and historical places. The closest airport is the London City Airport, which is some 13 kms away. 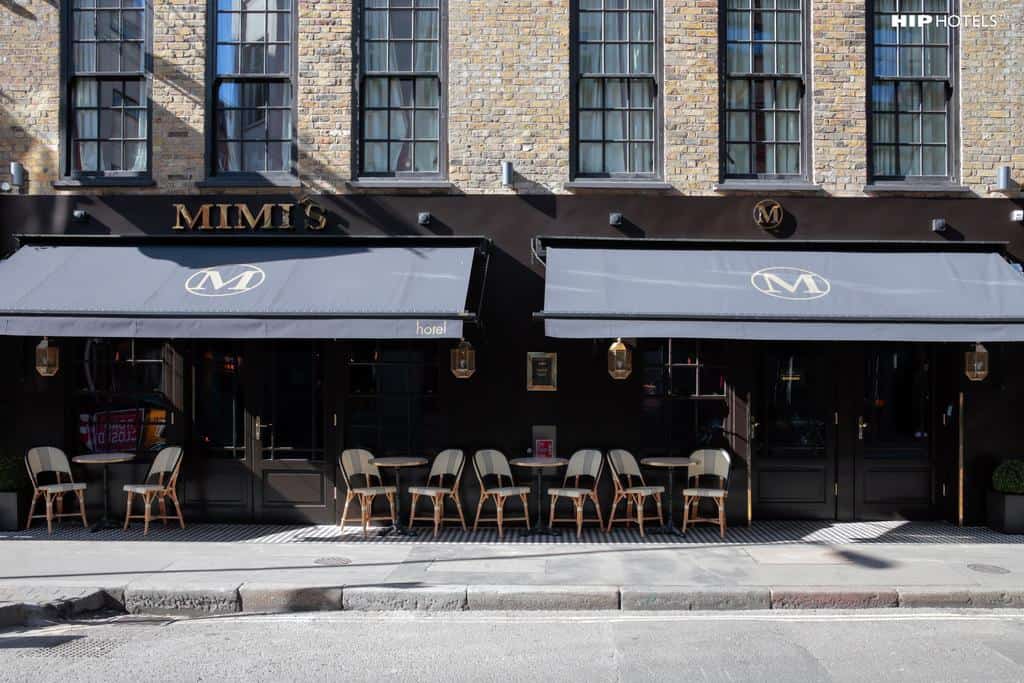 4. The Nadler Soho
Located at the envious Oxford Street, the tastefully made rooms of the hotel have free Wi-Fi, LED TV and digital editions of international newspapers.

Each room is chic and stylish with a contemporary bathroom, hair dryer, desk, small kitchen and a cabinet for your laptop. Special rooms offer an extravagant bathroom with speakers linked to the TV unit.

The boutique style hotel gives you a great chance to shop, visit historical places and nice parks when you decide to step out.

5. Hazlitt’s
This elegant boutique style hotel is right in the middle of West End. Eye-catching rooms with antique furniture immediately capture you along with other comforts such as a library lounge, free Wi-Fi, 24/7 assistance at the reception.

The spacious bedrooms are sophisticatedly decorated with panelled walls. All rooms have a flat screen TV set, a minibar, a working desk and opulent bathrooms.

A lip smacking breakfast awaits you every morning, with oven fresh croissants and heavenly coffee. Hazlitt’s building is more than 3 centuries old and is well known for its precious antiques like chandeliers, Victorian baths, engraved wooden beds and historical features.

All popular tourist spots are situated very close to Hazzlitt’s making it a final destination for guests and tourists alike. 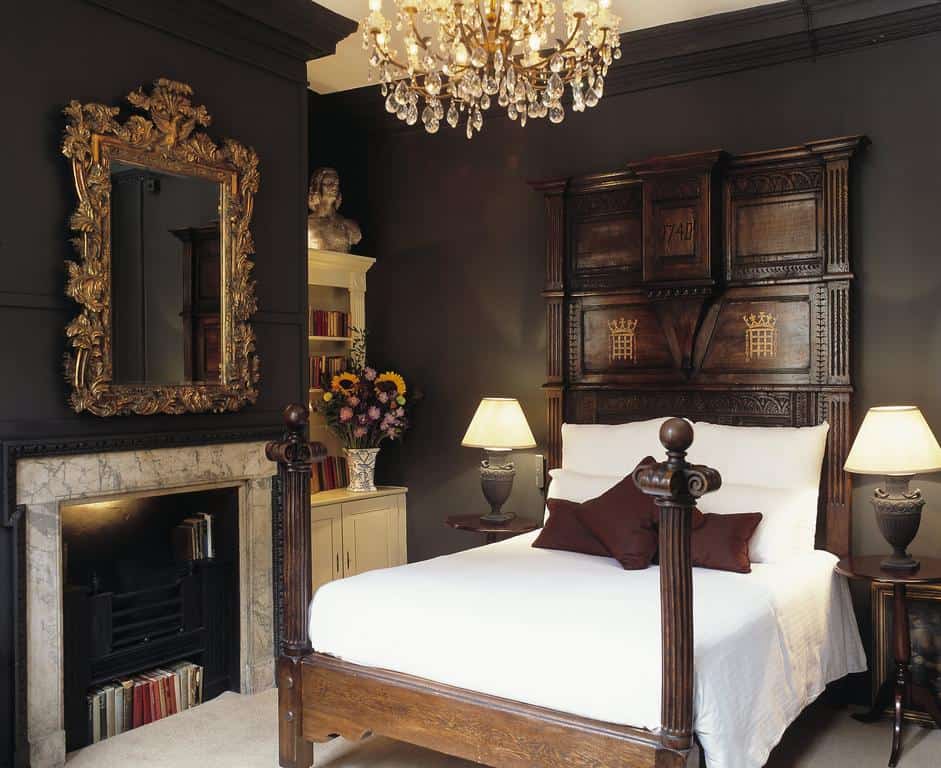 All rooms are equipped with AC, flat screen television, an exclusive bath and a working desk.

They have an on-site restaurant catering to modern and traditional English breakfast and other dishes. Other places catching your interest are Place of Wales theatre, Trocadero Centre, a variety of pubs, nightclubs and bars.

The surrounding areas of the hotel offer exciting experiences for travellers like shopping, historical places, parks and more. 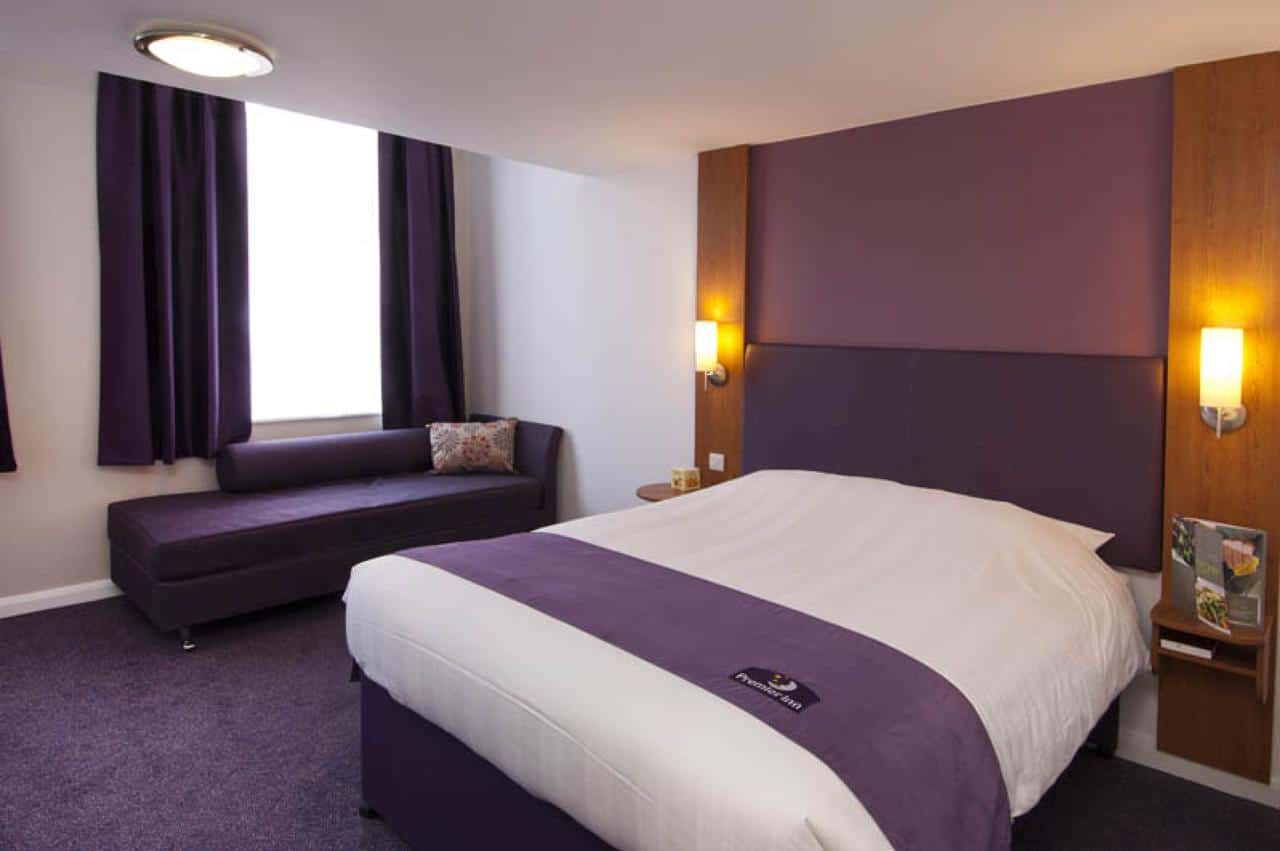 7. Karma Sanctum Soho Hotel
This Sanctum Soho Hotel is a beautiful building in West End, which houses a rooftop garden, an ‘always open’ bar and the popular Restaurant No. 20. Additional attractive features are the hotel’s own cinema and outdoor hot tub.

The uniquely designed building houses rooms with free Wi-Fi and plasma TVs playing Sky movies and Wii console. Get ready to have a rocking time with the mini bar, an iPod docking station and contemporary baths providing organic toiletries.

The restaurant serves British cuisine as all 3 meals of the day. There are refreshments like tea, coffee and cocktails too. The hot tub is open 24 hours, and guests can laze around in the bar, lounge with a fireplace and a resident’s area.

You can go for a walk to Hyde Park or any of the shopping centres, parks, etc. 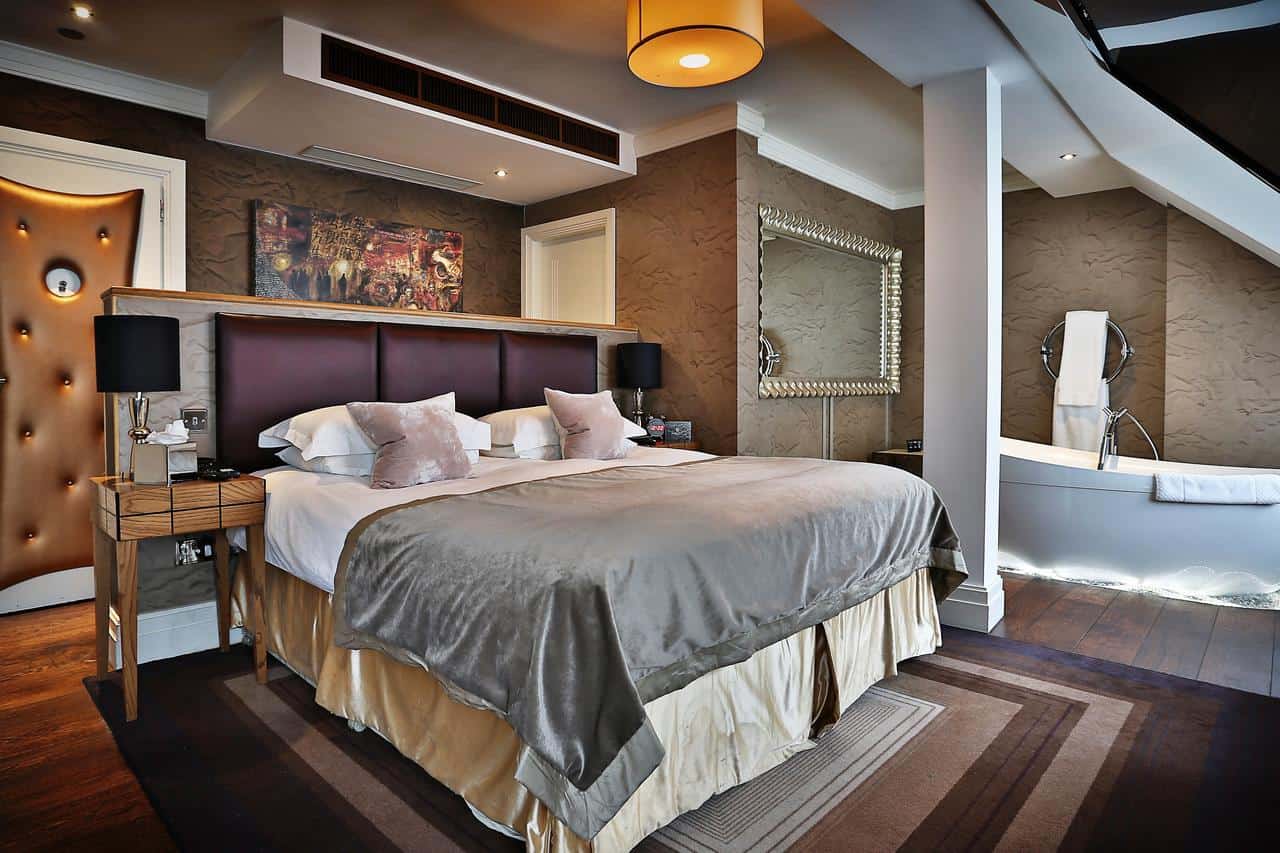 8. The Piccadilly London West End
This 5-star hotel is at 300m from Leicester Square. It has a magnificent fitness centre, boutique bedrooms with Wi-Fi.

The grand rooms can be set with your type of mood lights, bathrooms oozing with richness, AC, satellite television and working desks. A posh bar with refreshment lounge as well as an all-cuisine breakfast adds to the glamour quotient.

The hotel is minutes away from major entertainment centres such as cinemas, bars, shopping centres, parks, theatres, etc. It is counted as one among the best in the whole of London city. 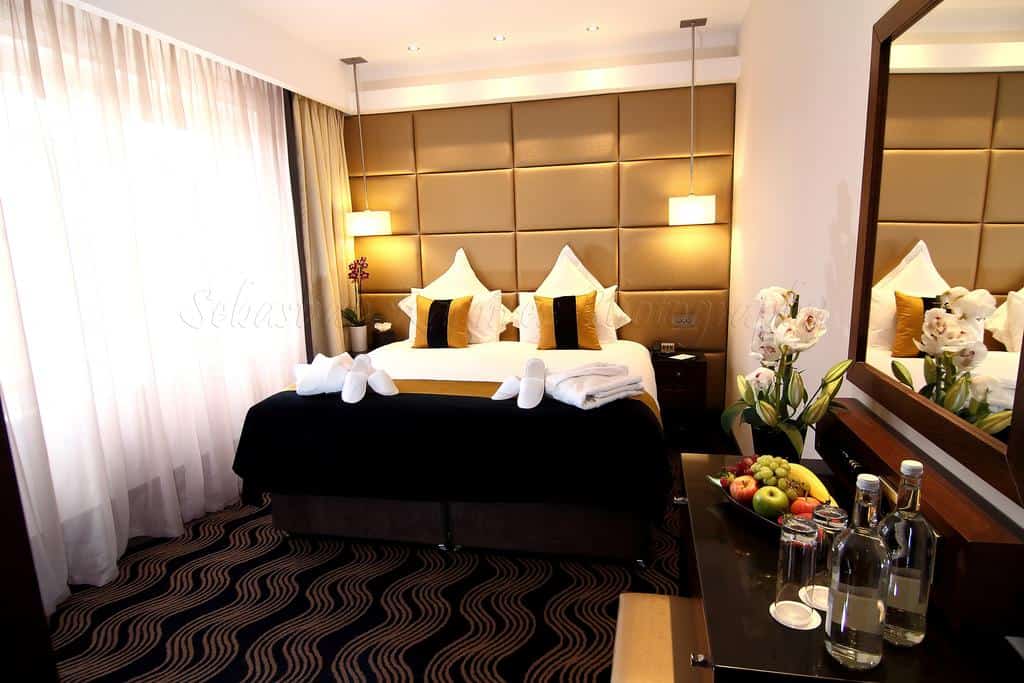 The air-conditioned suites are decorated in a modern fashion including an entertainment set, a TV with sports and movies channels, free Wi-Fi, bathrooms with great interiors, picture windows, etc.

Your body can relax at the Thai spa, along with a sauna and gymnasium. The Courthouse has a couple of dining in restaurants serving Asian cuisine, a cocktail bar, and rooftop terrace.

The hotel is ideally situated in the most frequented London’s district for shopping and theatre. 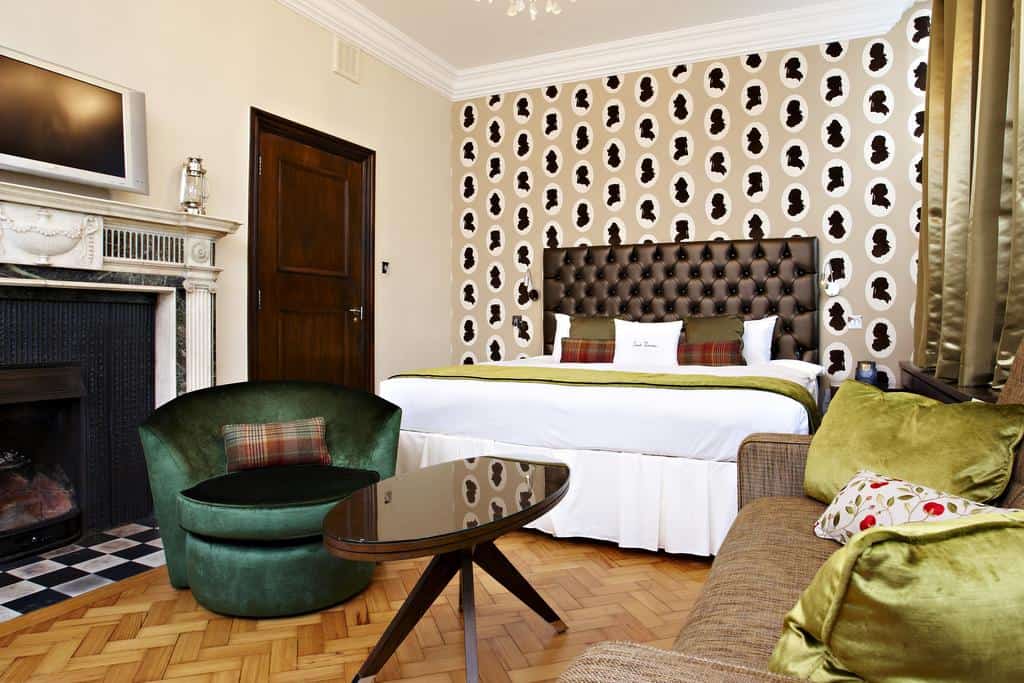 10. W London Leicester Square
This hotel provides splendid bedrooms and a chic cocktail bar. You get pampered with the amenities like iPod docks, giant windows, luxurious bathroom essentials and a majestic library.

You can cool your heels at the spa with a sauna, steam room, and a beauty boutique. W London offers a musical weekend with a live DJ, serving cocktails and snacks in privacy.

The hotel is located very near to Chinatown and Soho. Other surrounding areas are the Piccadilly Circus, shopping malls, etc. with the Leicester Square Underground Station in the vicinity. Guests staying at this hotel are very happy with the location and services. 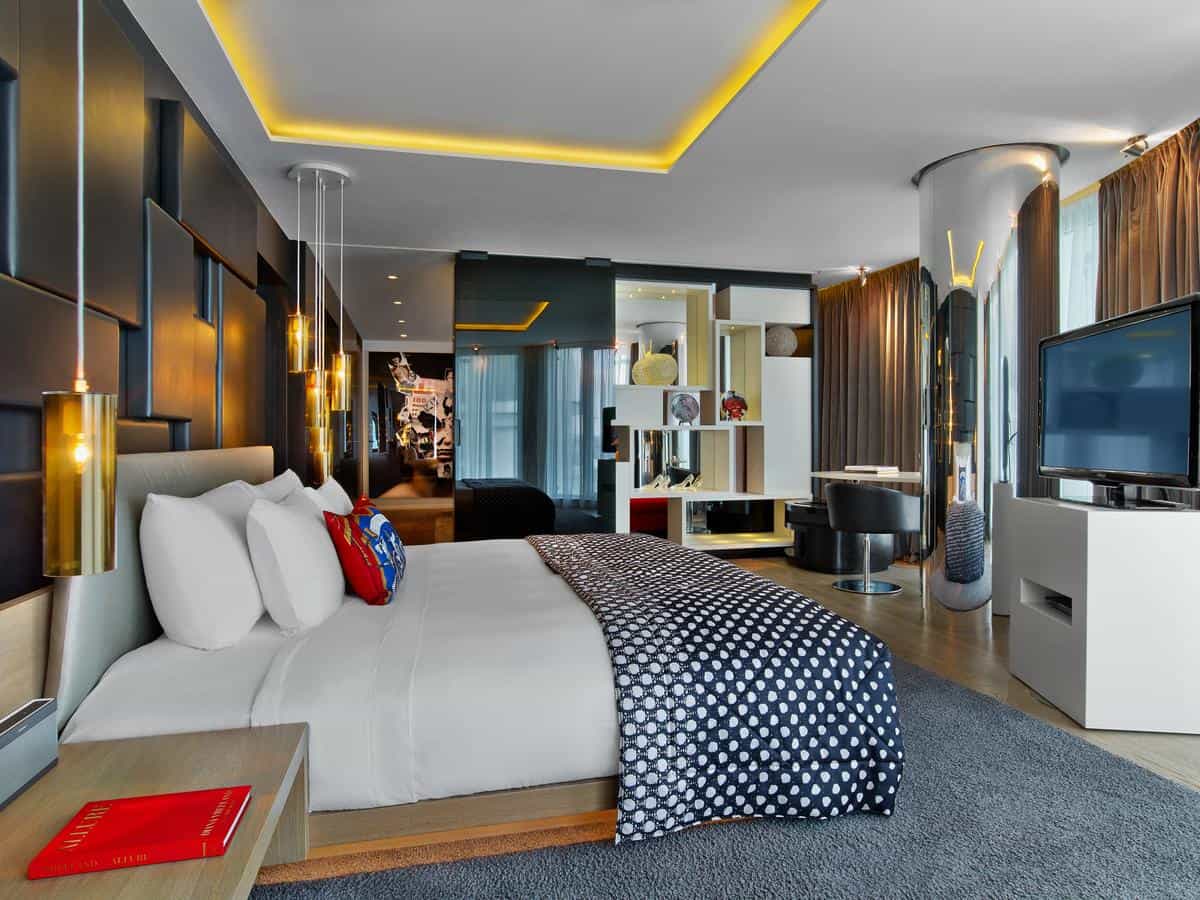 11. The Soho Hotel, Firmdale Hotels
The Soho hotel is at arm’s reach of Oxford Street. It includes a fully equipped gym as well as your personal trainer. Each room in the hotel features a TV, loaded mini bar, an iPod docking station, en suite bathroom.

The attached bar is an award-winning one. The location of the hotel is well connected to tube stations, cafes, theatres, and offers an amazing nightlife.

It is most convenient for the travellers who would love to shop, visit historical places, relax in the parks, etc. 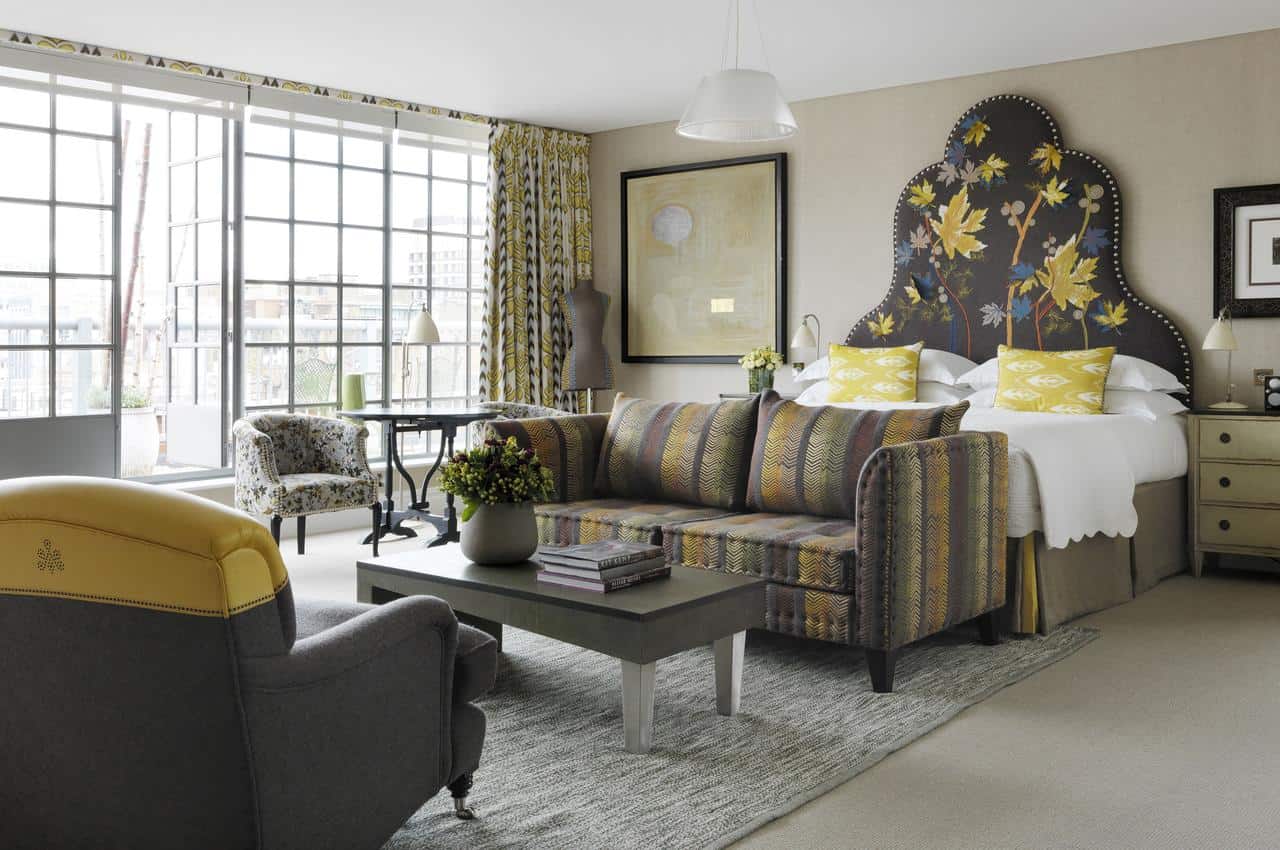 The boutique-style hotel has rooms with AC, mini bar, an iPod docking station, adjoining bathrooms with grand bathrobes and slippers. Some rooms come with a balcony or terrace view.

If you are looking for luxury hotels in Soho London, this is one to check out. There is a 24/7 reception at your service, valet parking and concierge service. Other provisions include room service, storage for luggage, room breakfast or packed lunch.

You can shop inside the property and have arranged meetings. All places of importance are at a close range of the hotel. Piccadilly Circus, Leicester Square, Trafalgar Square, Buckingham Palace, Big Ben, Westminster are situated close by, as are the other shopping centers and parks. 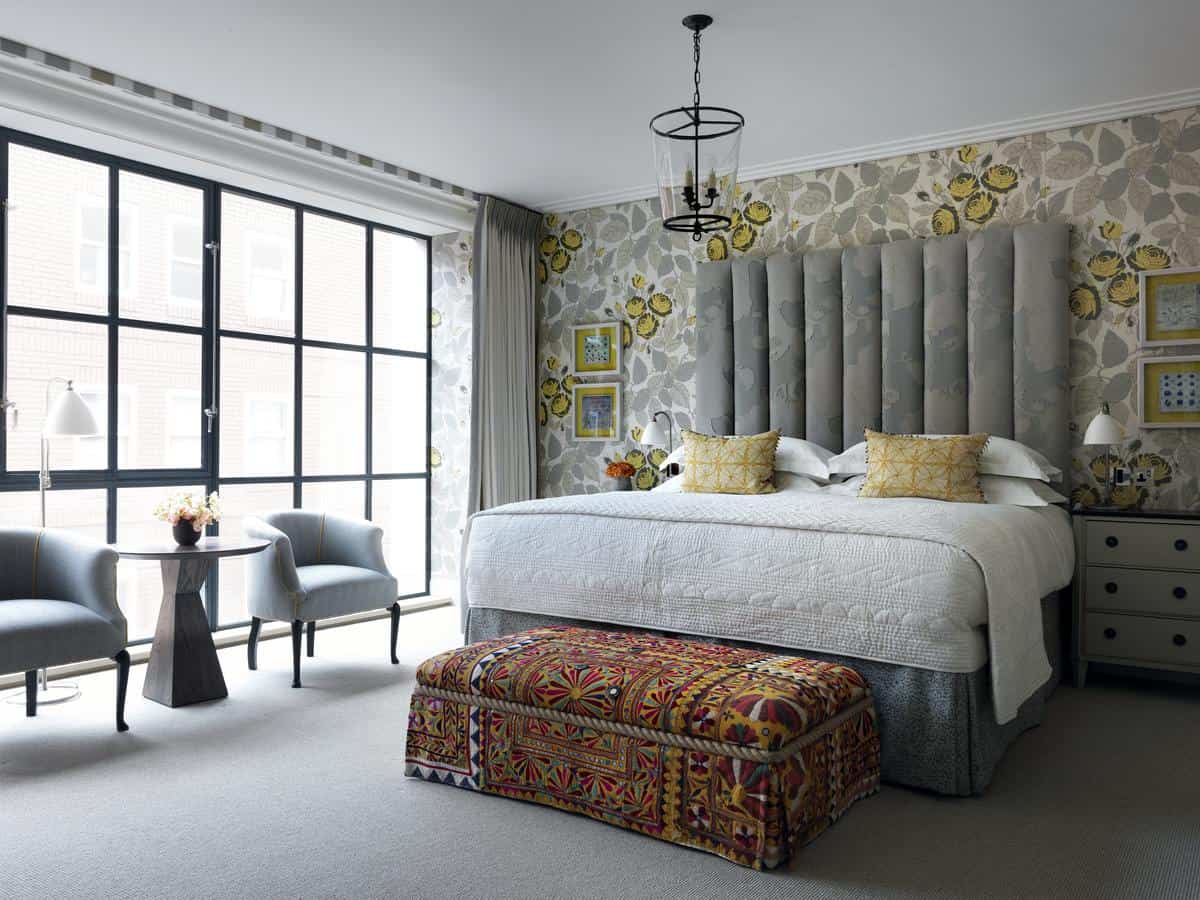 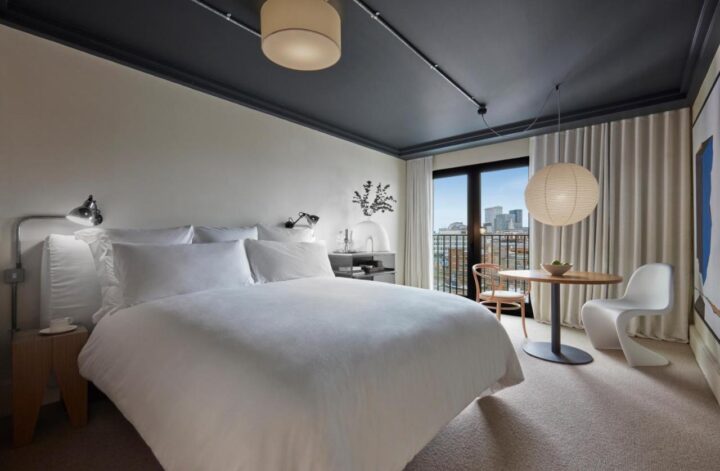 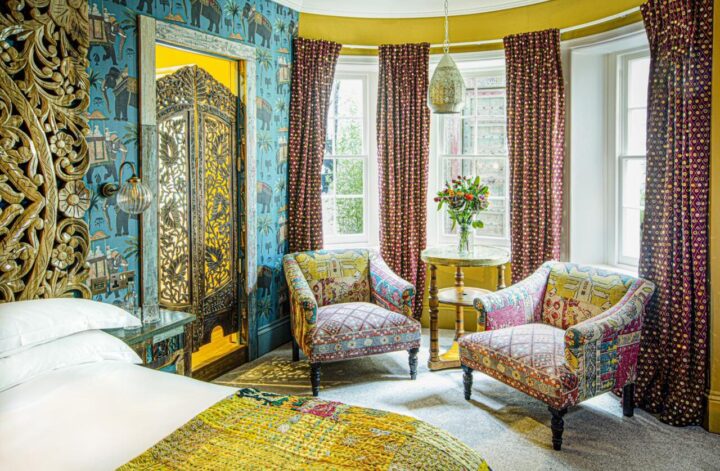 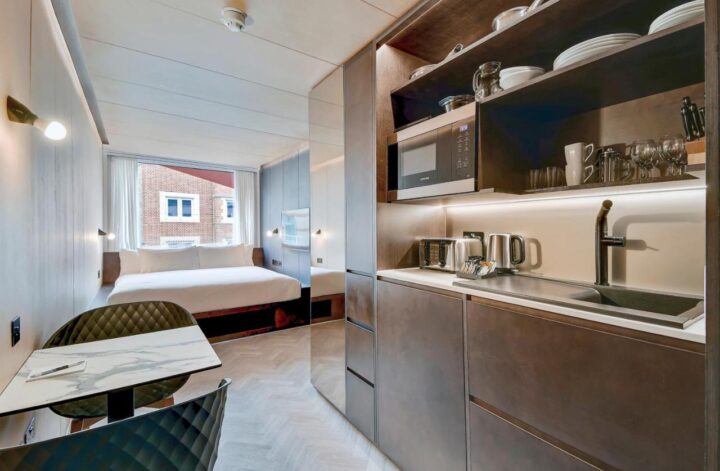