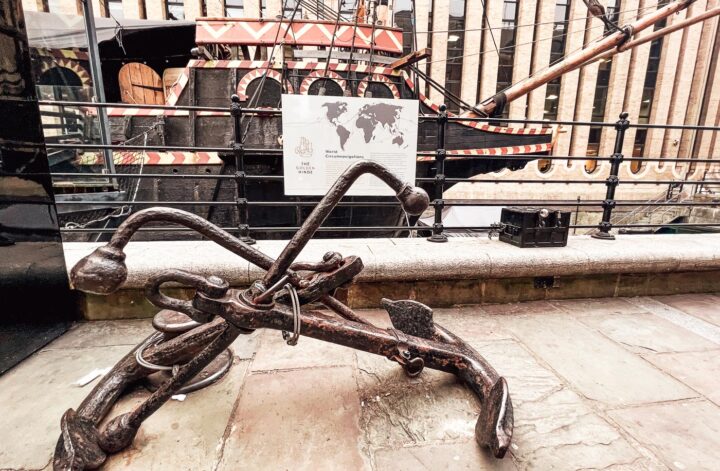 Many tourists and Londoners pass through London Bridge but pass by this historical gem that is the Golden Hinde.

Notable globe circumnavigations took place between 1577 and 1581. Sir Francis Drake was the captain. For over 70 years, people visited the original Golden Hinde before breaking it down in Deptford. 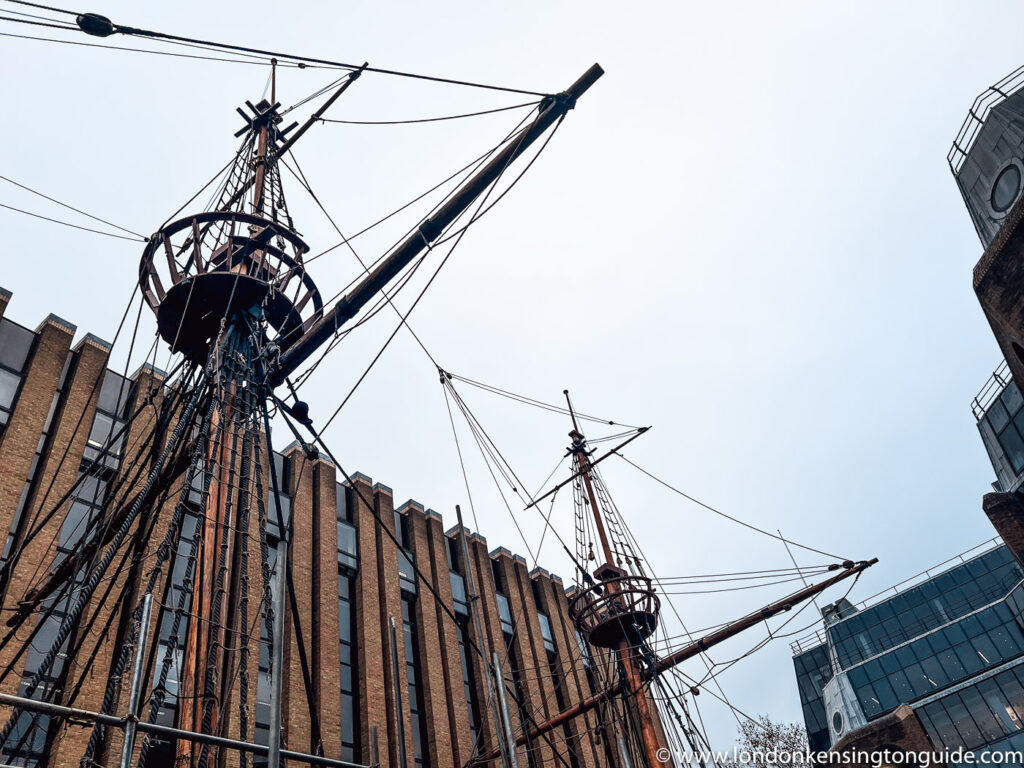 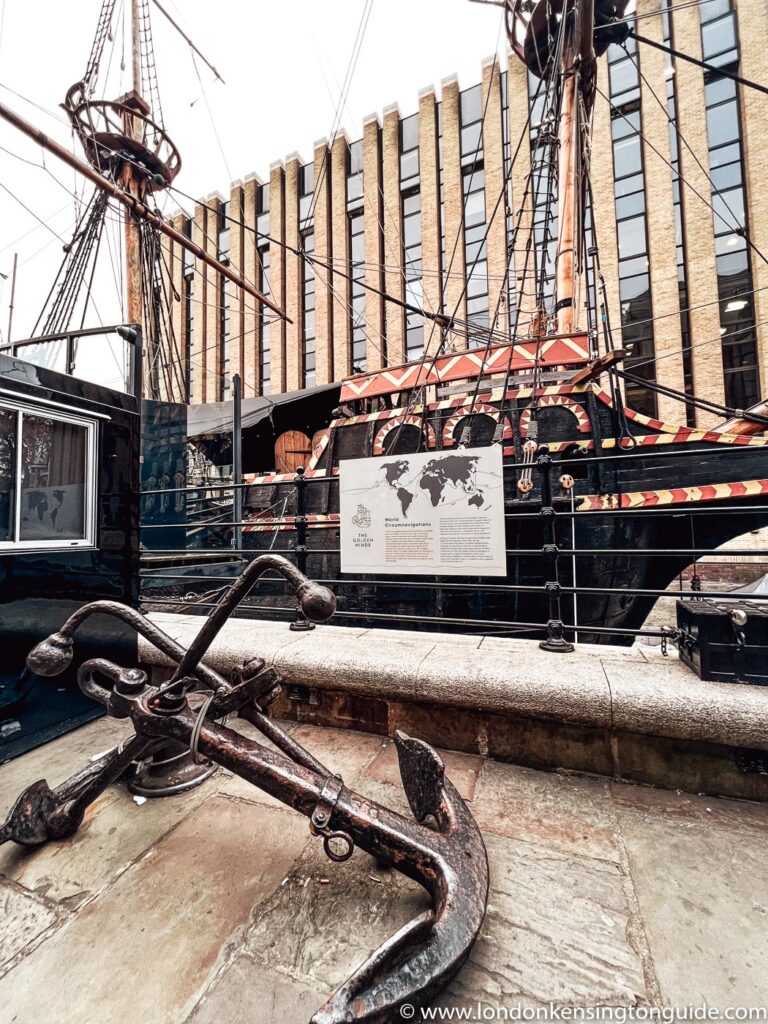 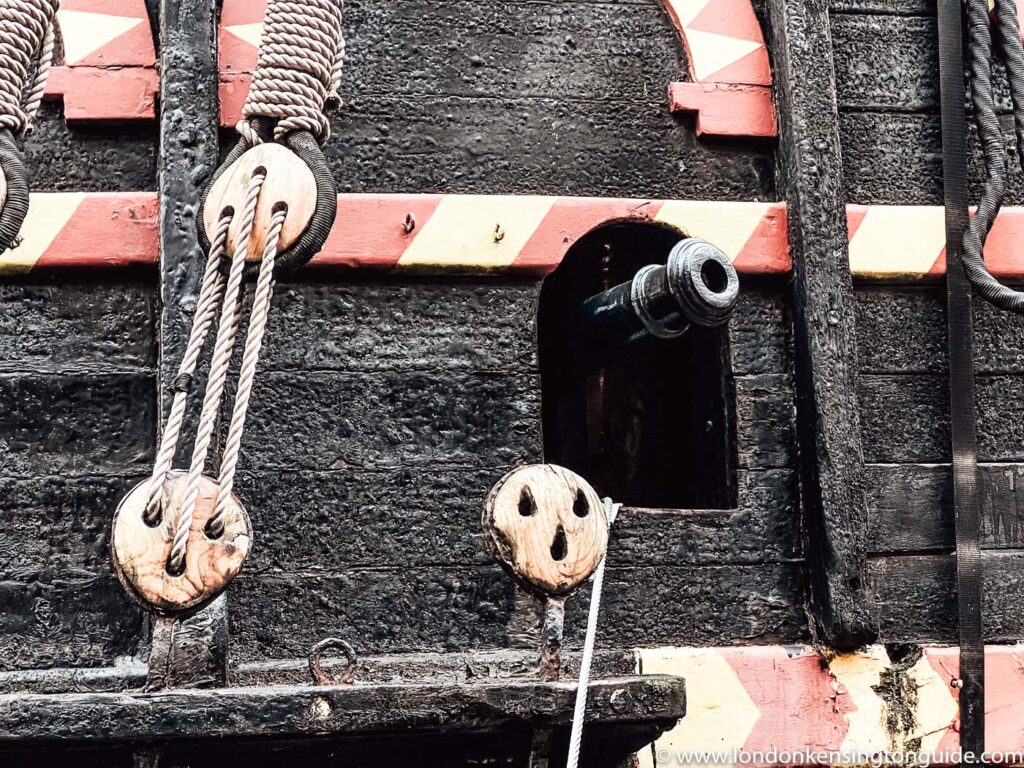 A little History About The Golden Hinde

The Golden Hinde is located on the banks of The Thames, sat between London Bridge and Southwark Bridge. The replica of this maritime museum was later built in Appledore using traditional skills.

It was launched in 1973 and has circumnavigated the globe for over 100,000 miles. There’s a complete circumnavigation in its name, which is rare for a ship.

It also has two Atlantic crossings to complement the entire circumnavigation.

In 2017 based on what had happened to the original golden Hinde, a survey was commissioned because of the necessity of the major conservation project.

The survey showed that the ship was built strongly, and there was a possibility of it lasting well into the future, providing a rigorous routine was maintained.

After the survey, the team started planning how the ship’s condition would be maintained and most probably returned to its condition when it was launched in 1973.

However, there were many challenges that the team faced. For example, drafting all the requirements was challenging, and the actual maintenance costs involved.

The first plan was to replace 300 tons of the ship entirely as anything less would essentially return little benefit.

See also  Exciting Things To Do In London At Night - From Unusual Sights To Food & Night Tours!

One major problem being experienced is carrying out the replacements while tourists are still visiting the Golden Hinde.

Another challenge has been finding experienced personnel to help with the operation. But overall, things are moving smoothly. You can see much of the on-going restoration works as you pass the ship. 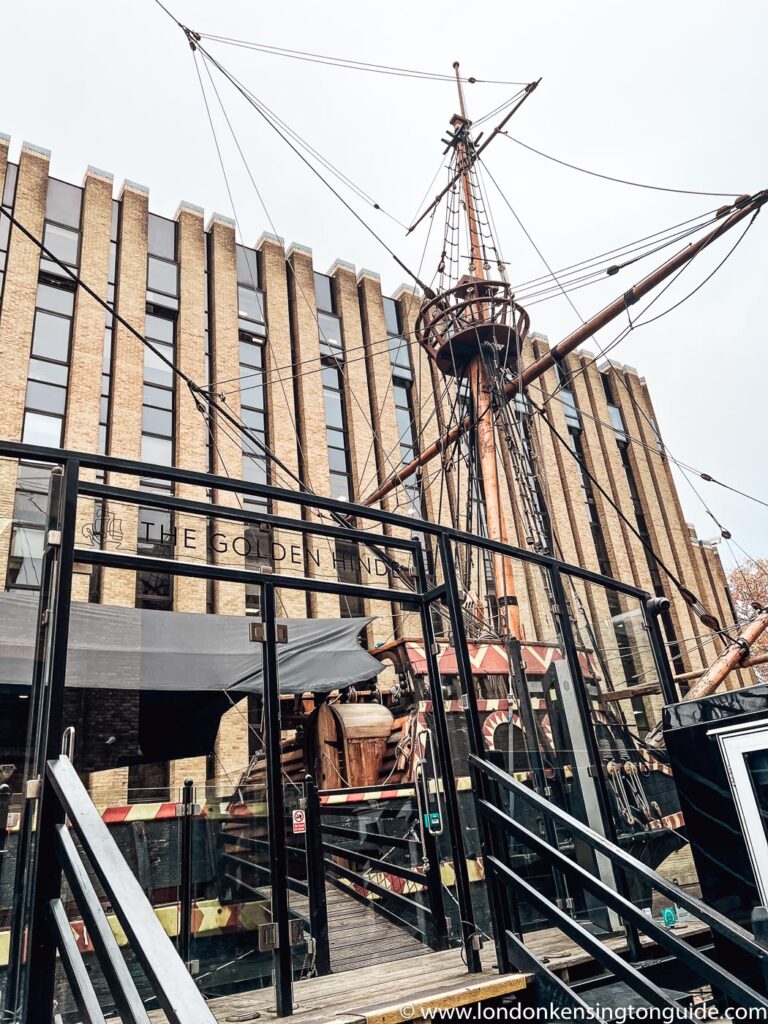 You can certainly admire the Golden Hinde from the outside but to fully experience it, one needs to buy a ticket and step aboard the ship. Tickets are £6 for all apart from those under 3s who can visit for free.

You can learn about its history, where its been, how navigation happened on the ship and many other aspects of life aboard the Golden Hinde as it sailed. 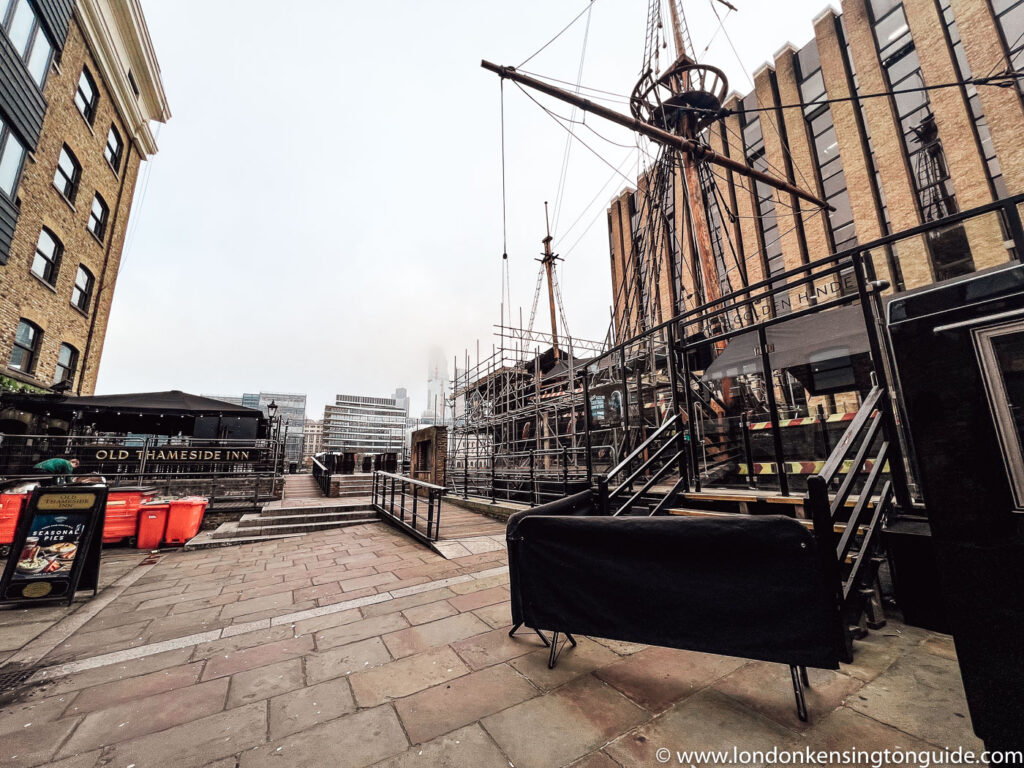 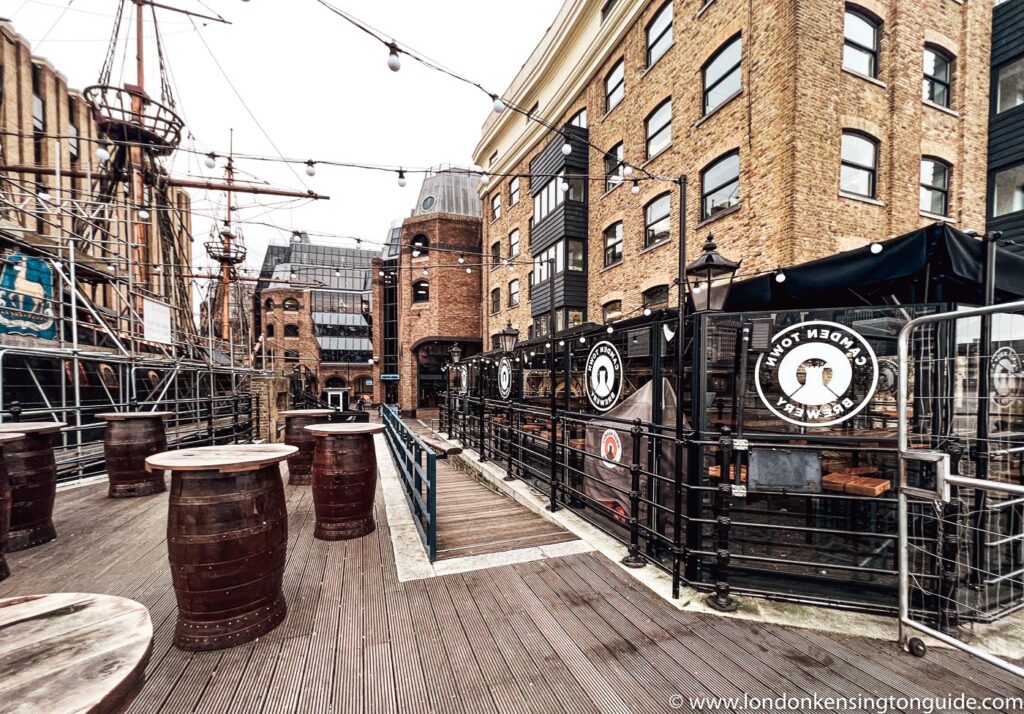 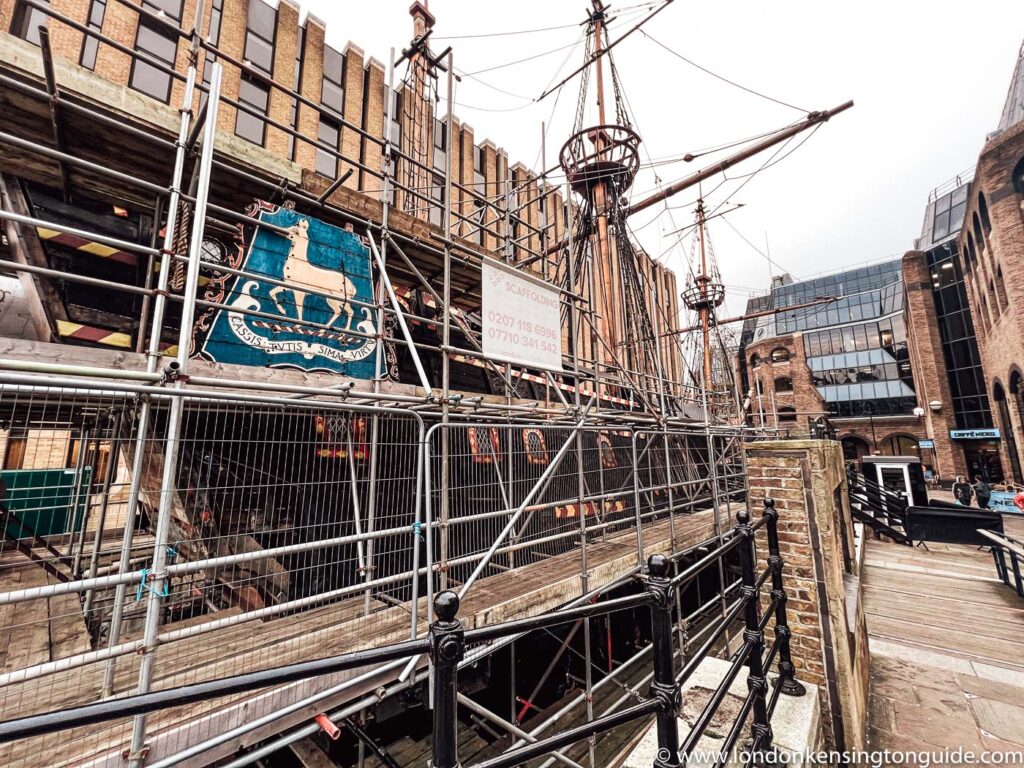 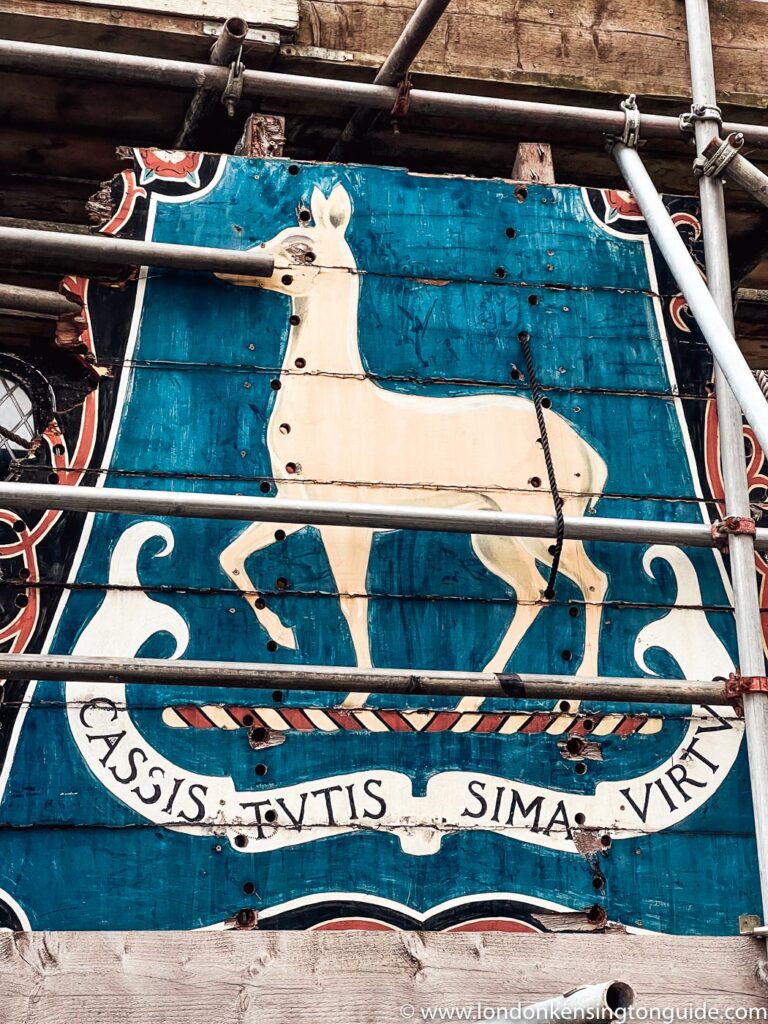 Things to Do Near The Golden Hinde

There are plenty of things to do near The Golden Hinde, from those we have listed on our London Bridge itinerary items to places like Tate Modern, St Pauls, Madison Rooftop Bar, Great Fire of London Memorial, Sky Garden, The Globe Theatre, Anchor and Hope pub, Millennium Bridge just to name a few.

It is one of the oldest prisons with a massive history. It will take around one hour and 15 minutes to go around the prison.

Southwark Cathedral thrives on the bank side of the River Thames. Services are accessible in this Anglican Cathedral, where you can enjoy praise and worship with excellent music.

But if you want to learn about the history of the Cathedral or see the galleries, you may have to pay for something small. Southwark Cathedral also offer afternoon tea for those looking for affordable afternoon tea in London. 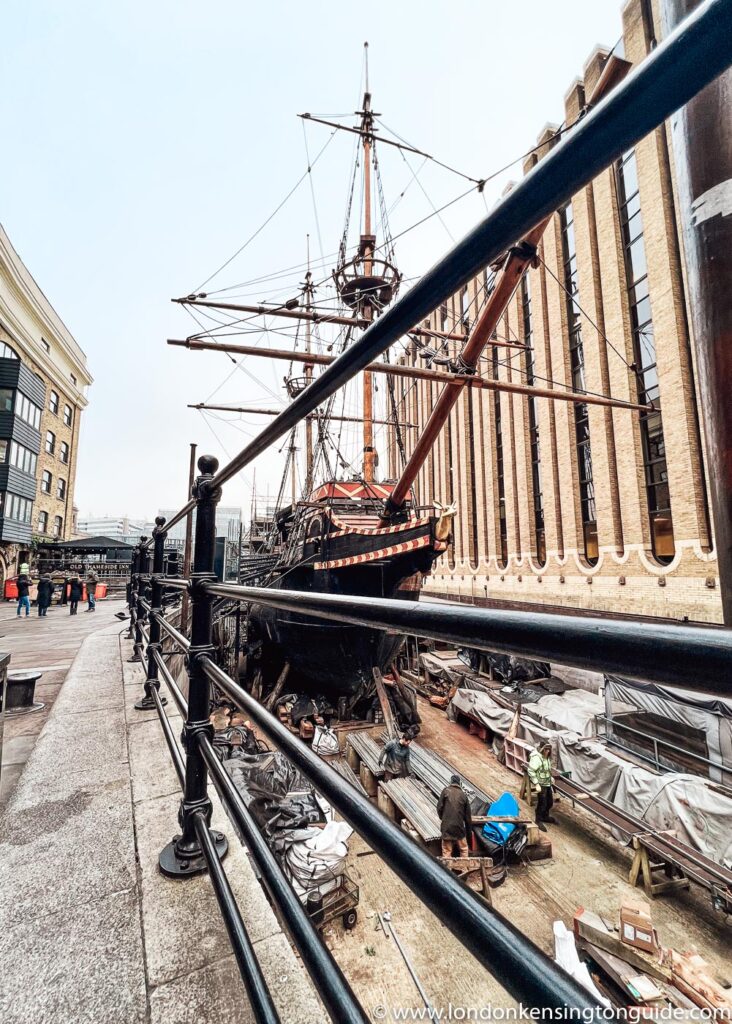 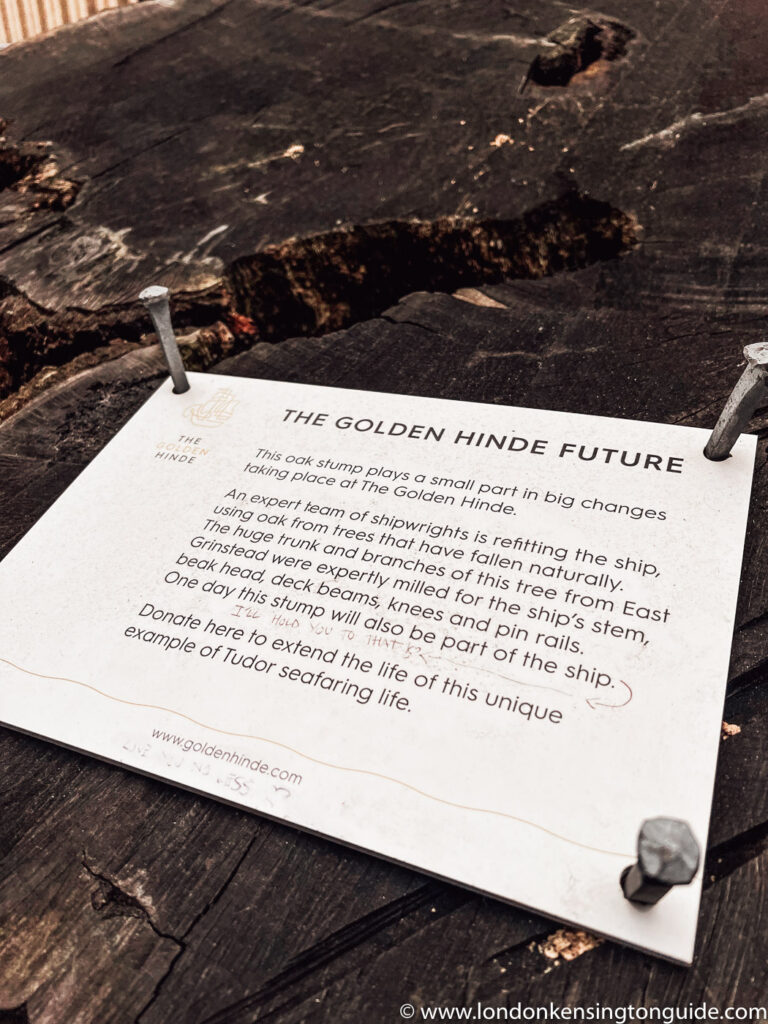 Borough market is expected in London because you will always catch whatever you are looking for in this market.

A wide range of products is available, including homeware, freshly baked bread, and cakes, you can also find cheeses from around the world, Gelaterias, including world cuisines foods.

From Indian, Iranian, Iraqi, Chinese, Italian, Spanish, British, Argentinian and more. In addition, there are plenty of bars around Borough Market too including a cinema too.

If you are looking for the best views in London then look no further than The Shard. The tallest building in Europe.

You can find a hotel, many restaurants, apartments, a viewing deck, and a hospital in addition to offices all housed within this beautiful architectural masterpiece. 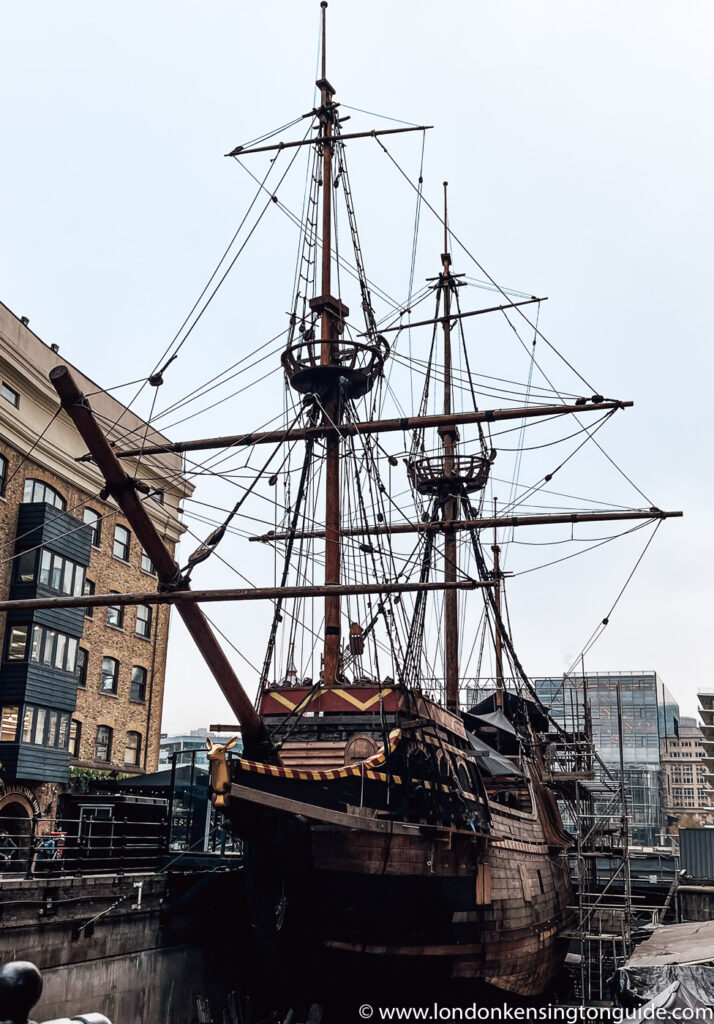 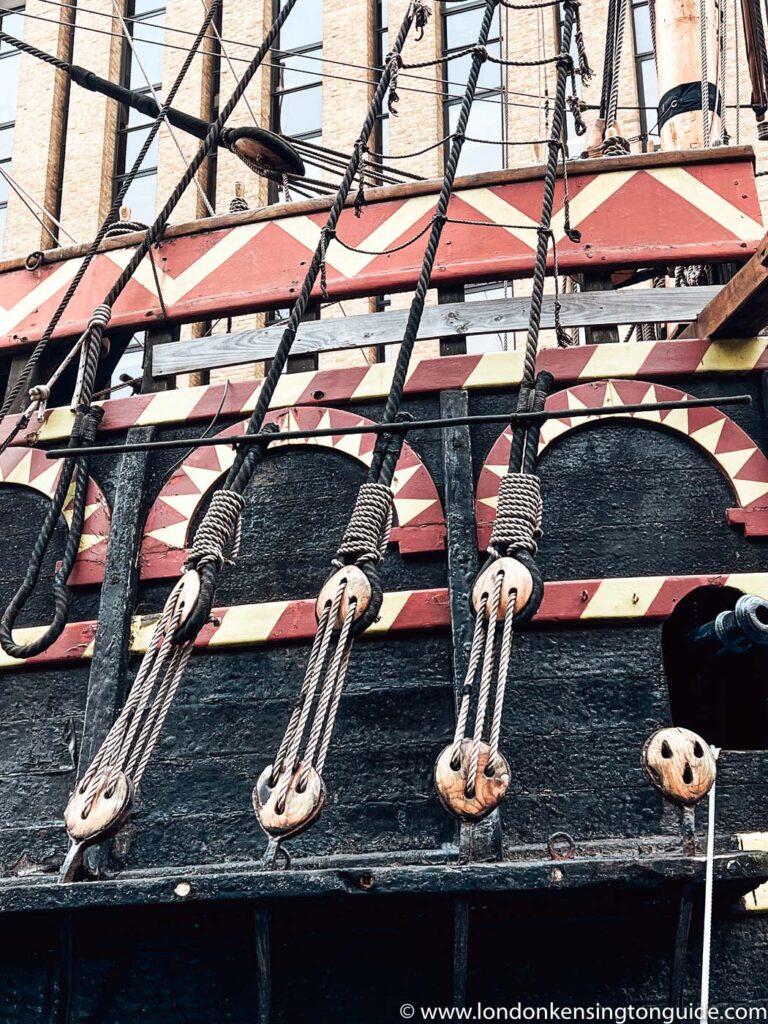 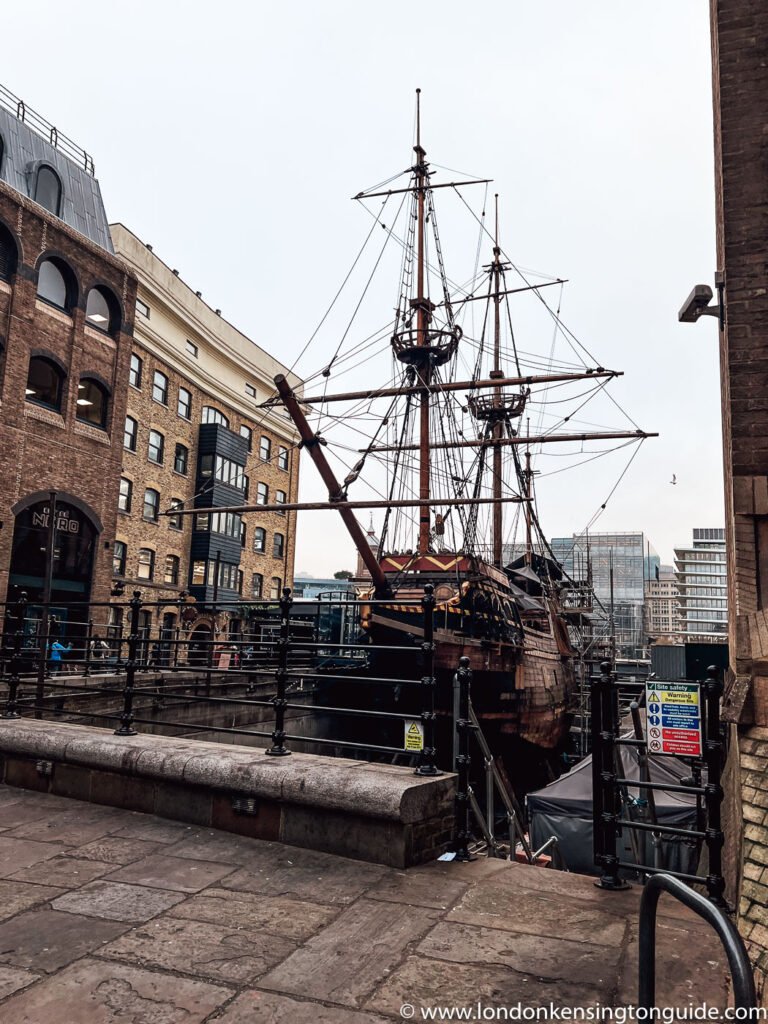 Winchester palace has existed for centuries since it was created around the 12th century. It was built specifically for Bishops. In 1814, the fire brought down the palace that had stood for centuries. However, you can still visit the area to see the remains and learn about the palace.

The Scoop At More London

This is an Amphitheatre on the southern bank of the River Thames. It has a seating arrangement that allows about 1000 people at a time. You can catch free festivals, films, theatre, and sports screenings.

Take In The Views From The Thames Inn 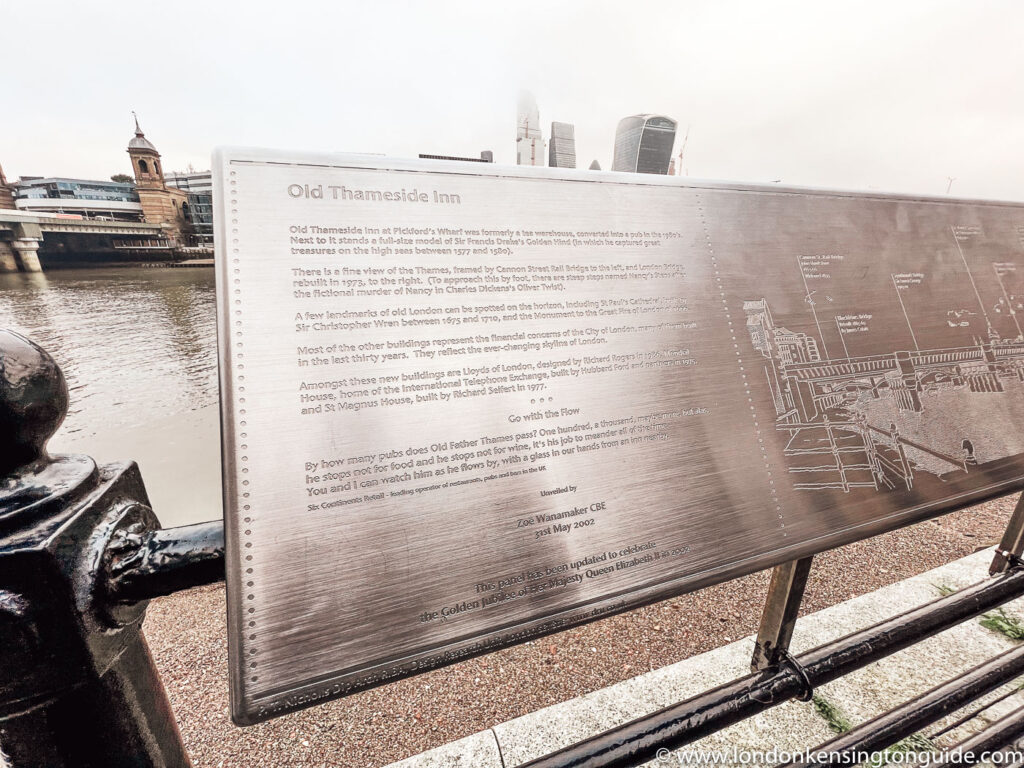 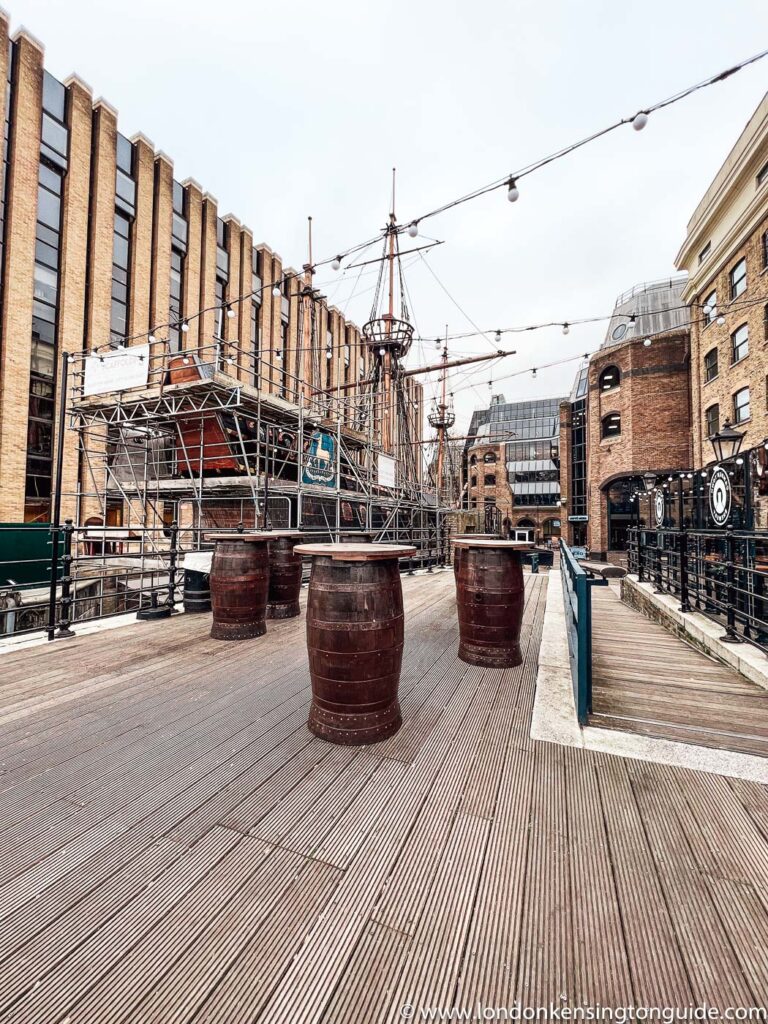 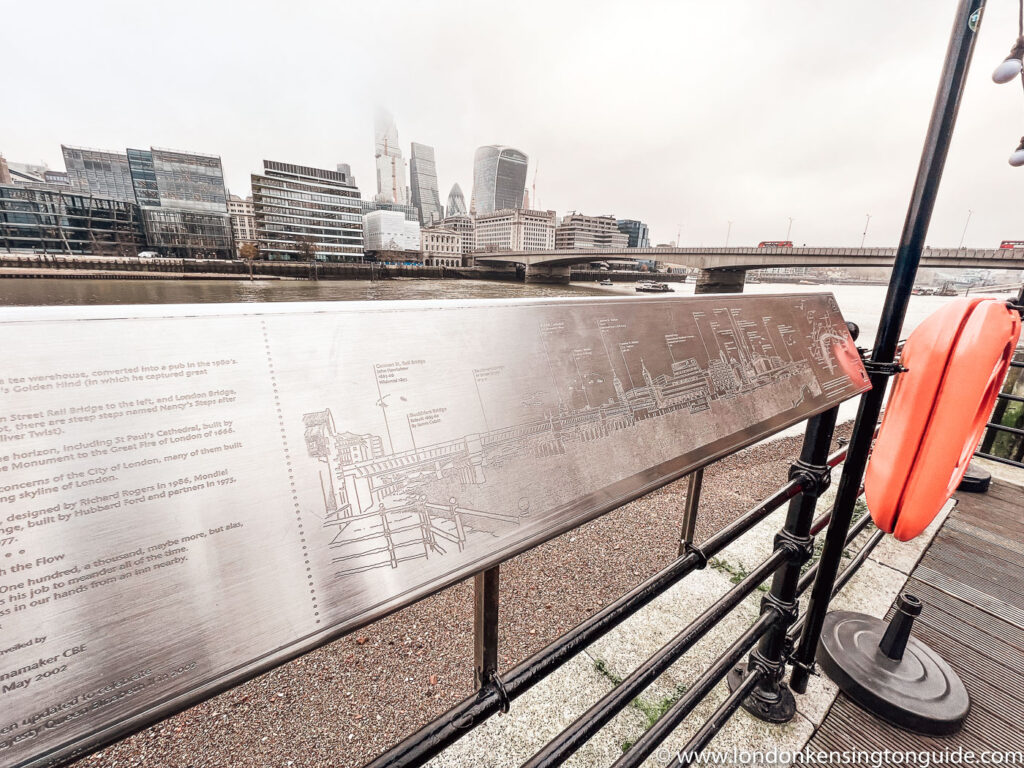 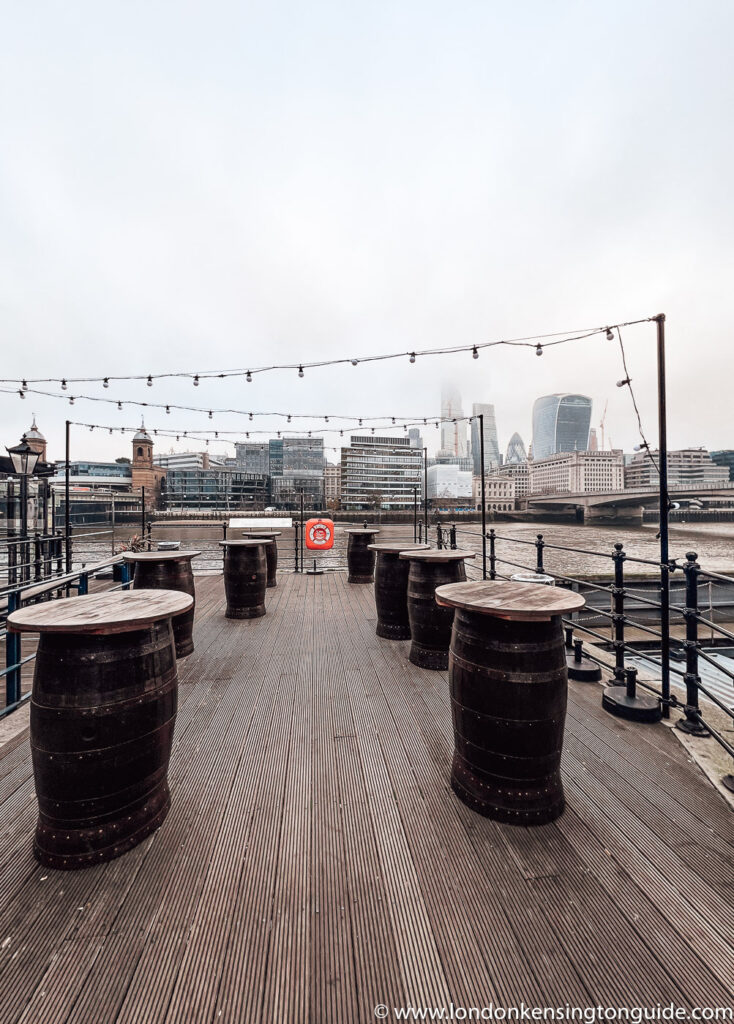 How To Get To The Golden Hinde

Located on the banks of the Thames, you can find it between London Bridge and Southwark Bridge. Also only a few meters from Borough Market.

The nearest station is London Bridge. Refer to the map below for additional directions. 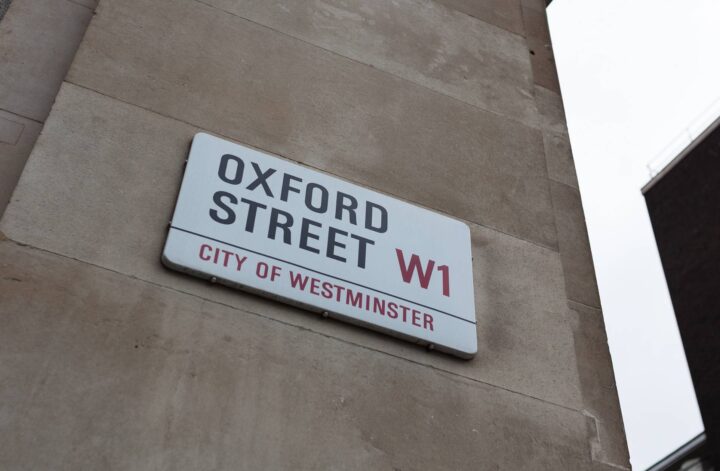 Why London’s Oxford Street Is Not To Be Missed 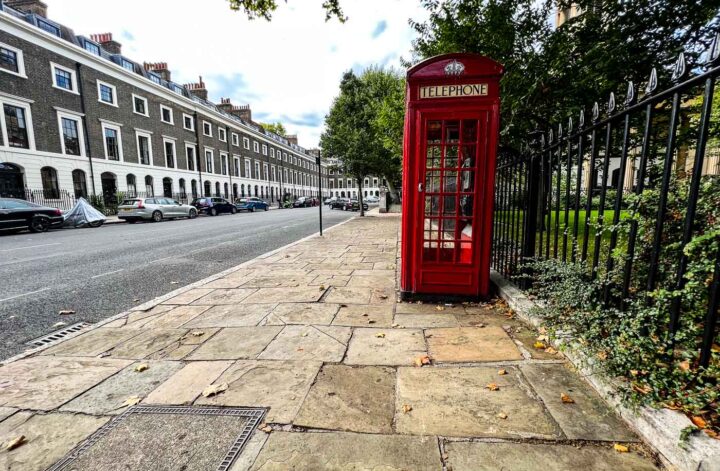 Local’s Guide To Things To Do In Bermondsey 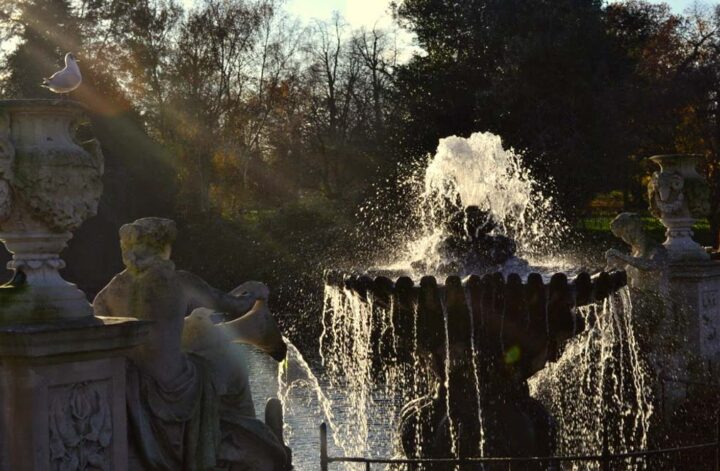