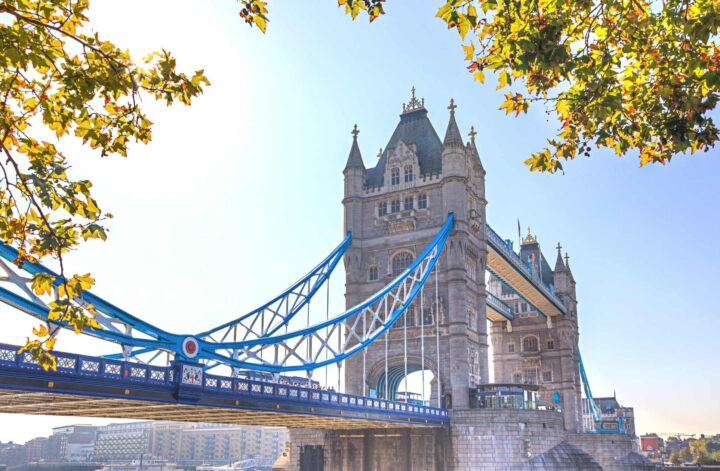 London, the scenic capital of England and the United Kingdom, is the largest city in the country. Like hundreds of other things, London can also be considered a city of bridges.

Strappingly twined with English culture, history, and heritage, this city of London has over 37 different bridges.  While they all make the city smoother and rove-able, many of them are also being enjoyed as scenic spots.

Tower Bridge alone is responsible for bringing many a tourist who want to walk on it, see it open to allow large boats to come through as well as those travelling simply for an Instagram shot of the bridge. Now you can actually walk on the glass floors of Tower Bridge.

Must See Bridges In London

Below, we will talk about 20 such London bridges with many not to be missed on London’s tourist attraction must sees.

The famous Westminster bridges, having been mentioned in many stories and novels of English literature, stands with pride over the river Thames. This 820 feet tall bridge is green in color with its tint matching the leather seats’ color of the House of Commons. Westminster is an arch-shaped bridge, opened on November 18, 1750 – The second bridge was inaugurated on May 24, 1862. At present, it is a road-and-foot-traffic bridge. If you are staying in hotels near London Eye the bridge will most likely be part of your hotel room view. 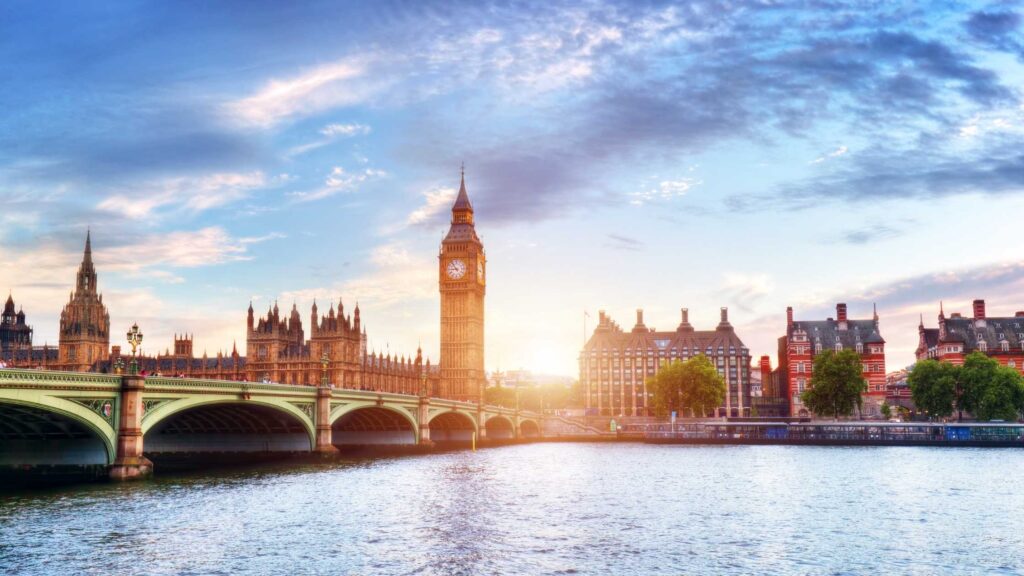 Yet another famous London bridge, and yet another one situated on the River Thames – This box grinder-shaped bridge took its name from the historic Battle of Waterloo and is a scenic one with its massive 1,230 feet length. Waterloo Bridge scars the river, being nestled between Hungerford Bridge & Golden Jubilee Bridges and Blackfriars Bridge. Due to being fascinatingly located on a river bend, this road and foot traffic bridge allows travelers to enjoy views of the Canary Wharf, London Eye, Westminster, and more.

An iconic structure of the entire London, the Tower Bridge stands in grandeur on River Thames near the Tower of London. It takes the London Inner Ring Road and merges it with the Tower Hamlets in north and Southwark. This suspension-style bridge is 800 feet long and was designed by Horace Jones. Since June 30, 1894, this bridge has been used for walking and driving purposes. Many of the London Bridge brunch spots have Tower Bridge as a backdrop view. 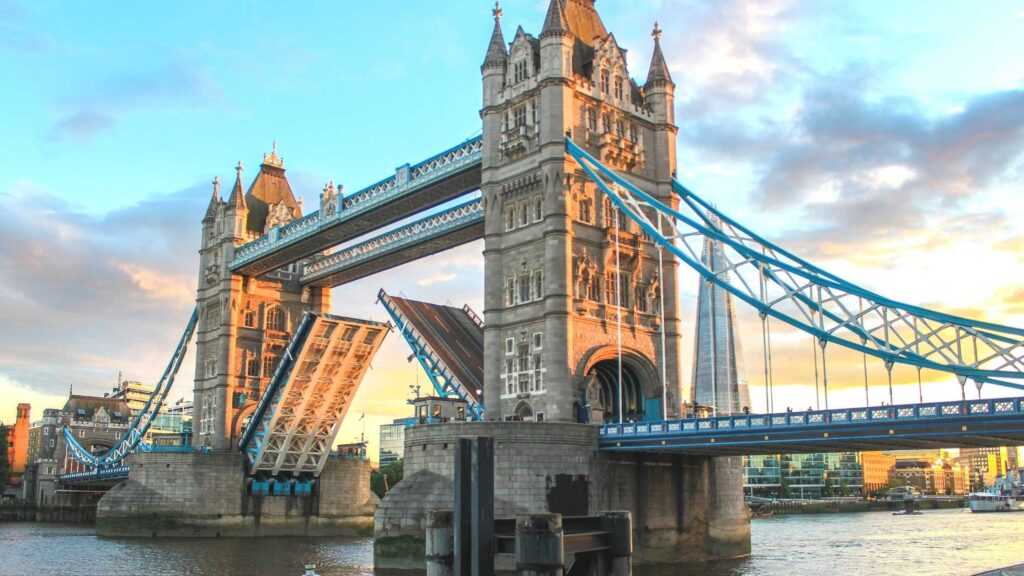 If someone mentions Lambeth Bridge, know that it is a foot and road traffic bridge connecting two sides of the River Thames near central London’s east-west direction. Keeping Westminster Castle in close proximity, the bridge gauges water between the Vauxhall Bridge and West Minster Bridge. Contradicting the Westminster Bridge, its red color matches the benches of the House of Commons. 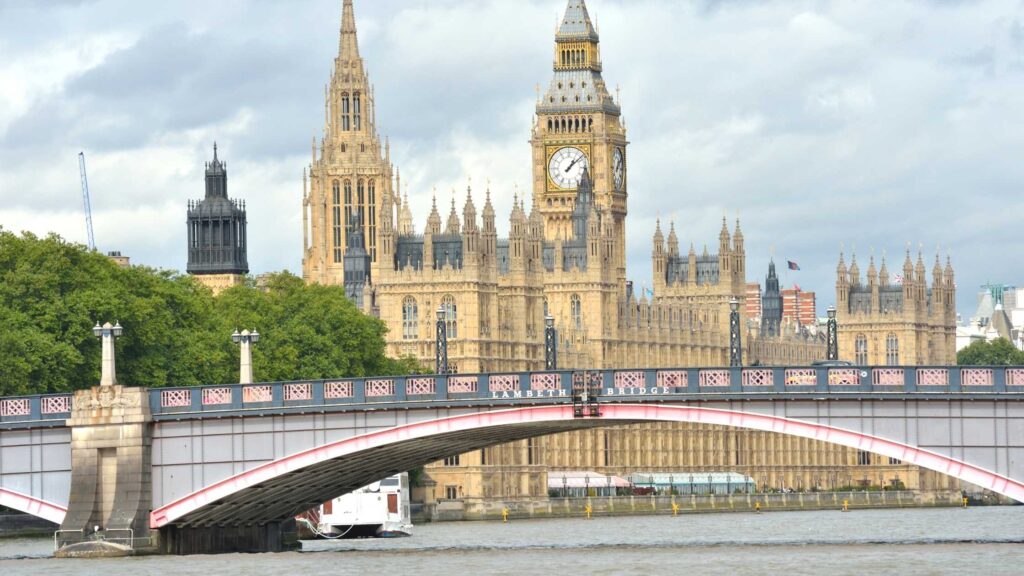 In central London, Vauxhall Bridge leaps over the Thames, keeping Pimlico on the left and Vauxhall on the right. This arch-styled bridge made of granite and steel stretches 809 feet and has a grade 2 heritage listing. Over 116 years ago, this bridge became operational by replacing the Old Vauxhall Bridge, also known as Regent Bridge. The bridge receives vehicles and pedestrians in unison. 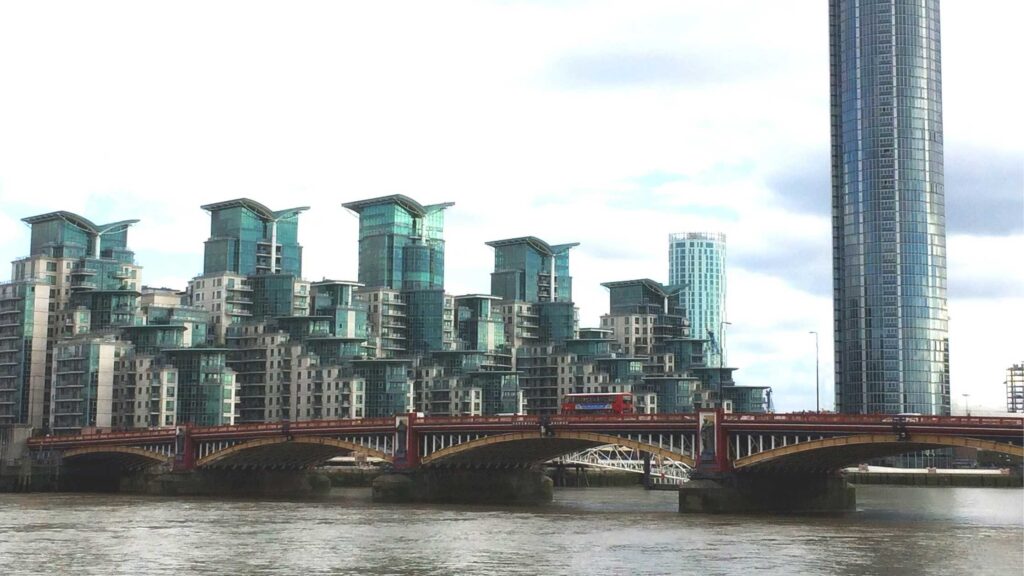 Albert Bridge is a white-colored bridge connecting Chelsea and Kensington over the River Thames in central London. This 710 feet long bridge showcases a hybrid design of 3 different designs. Noticing its slightly wobbly behavior, locals have given it an interesting name – The Trembling Lady. One can do driving, cycling, and walking through the bridge. But the authority restricts vehicles of over 2 tons and commercial vehicles of over 3 tons from driving through Albert Bridge. If you are working through your list of things to do in Chelsea or Kensington this bridge should not be missed. Particular at night when the lights on the bridge are switched on. 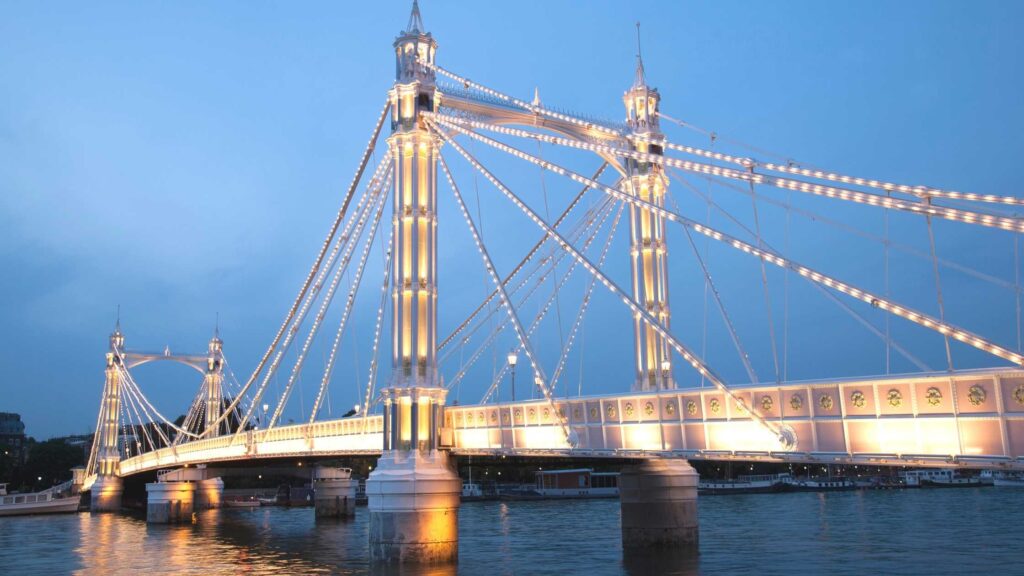 Alongside, the Millenium Bridge is comparably smaller, encompassing a length of 325 meters. This steel suspension bridge links the City of London and Bankside. Want to be close to this bridge? Be sure to stay in hotels in Southwark to be in walking distance of not only this bridge but many others mention here as well as attractions like the Shard or London Eye.

Twickenham Bridge unfurls itself over the Thames in southwest London, connecting the St. Margarets and Old Deer Park Richmond district. Opened on July 3, 1933, this bridge has Twickenham in its name because it is nestled on the way to a town called Twickenham. The bridge is based on three concrete-made arches balanced by concrete piers amid Art deco embellishments. This Maxwell Ayrton-designed bridge can be crossed by foot and cars. 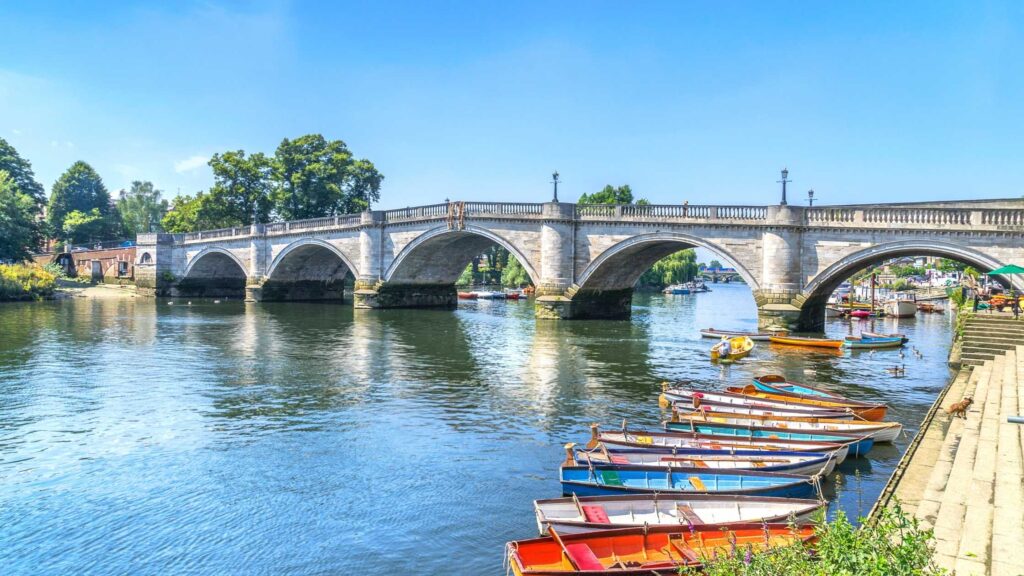 Kew Bridge is an arch-shaped and granite-made bridge on the Thames in the Kew. John Wolfe-Berry and Cuthbert A Brereton were the two designers of this bridge, having been formed by whom it has been functional for over 119 years. Key Bridge is established over the Tideway and connects Hounslow and Richmond. Kew Bridge is 1182 feet long, and in width, it is 75 feet. You can cross the bridge by car and on foot both.

See also  11 Famous Squares In London You Need To Visit 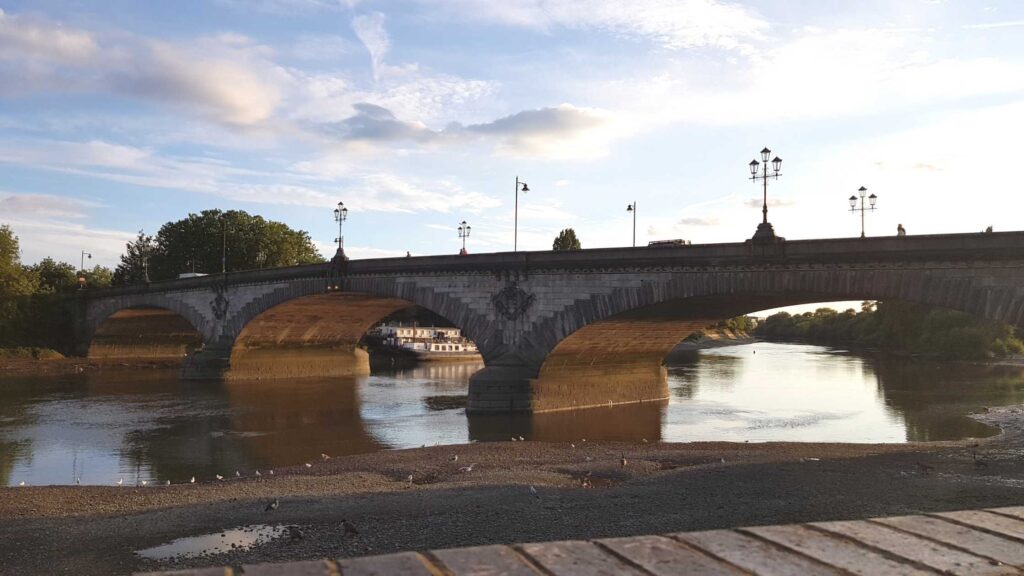 From above, Chiswick Bridge looks like a thread on a string, connecting Mortakke and Chiswick. This deck arch-styled bridge is 606 feet long and situated in West London. This bridge is quite famous for being close to the end of the Championship Course. In addition, it is a part of the Thames where rowing events and other boat races happen. Chiswick Bridge is a road and foot traffic bridge. 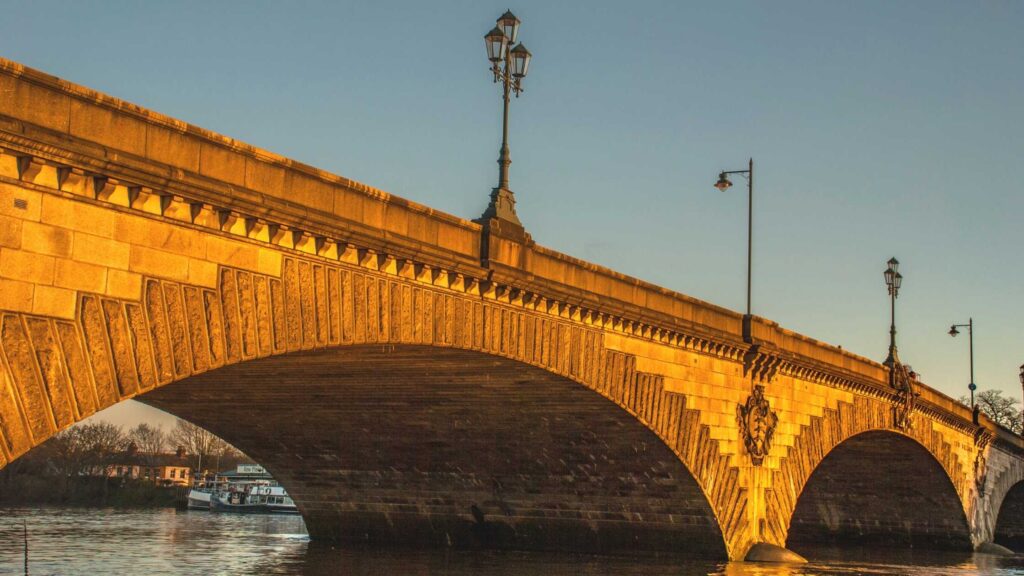 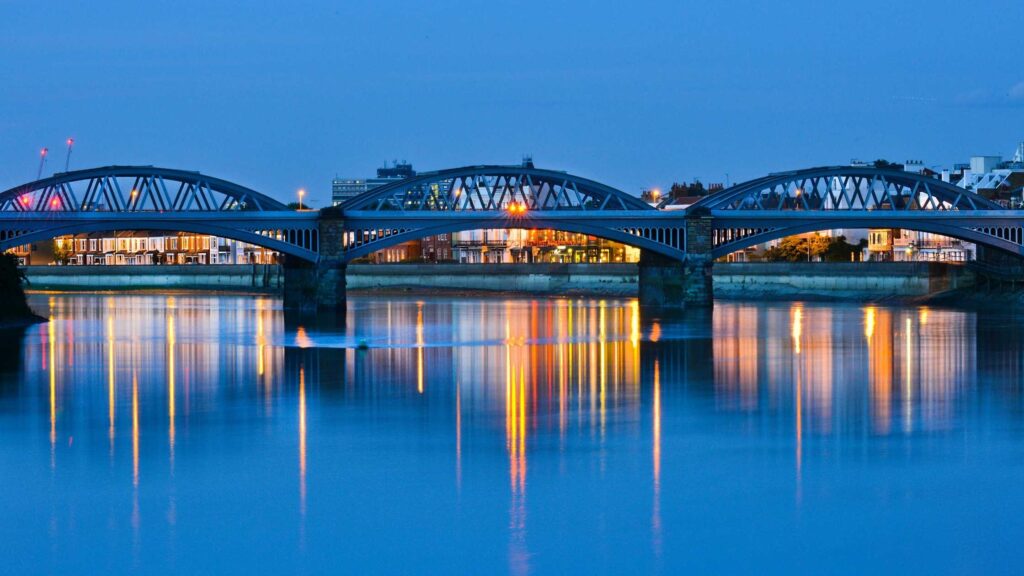 Richmond Lock has been standing as a living proof of time on the river Thames since 1894. This Lock is in Greater London and is 250 feet long and around 26 feet wide. This falling and rising low-tide barrage is a grade 2 listed structure with a pedestrian bridge over the river. The Port of London Authority maintains the Lock. 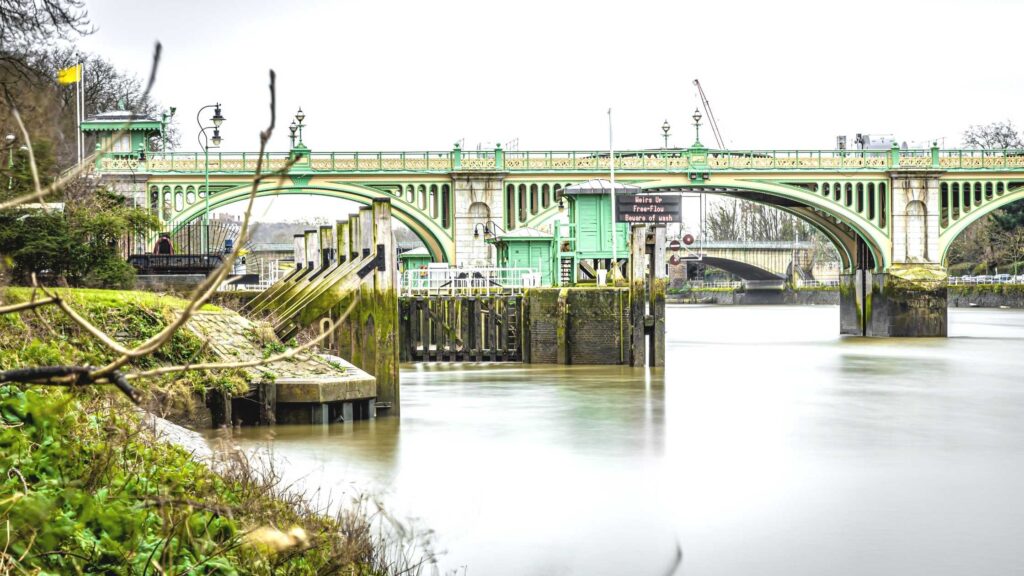 Holding A306 road all across its 700 feet long and 43 feet wide body, the Hammersmith Bridge stands as another major bridge on the River Thames. As per the design, it is a suspension bridge made of wrought iron, steel, cast iron, plywood, and stone. Located in West London, this bridge connects the southern section of Hammersmith in the London Borough of Hammersmith and Fulham. Similarly, it links Barnes in the London Borough of Richmond south of the river. In addition, the bridge contains two roads for motor vehicles. 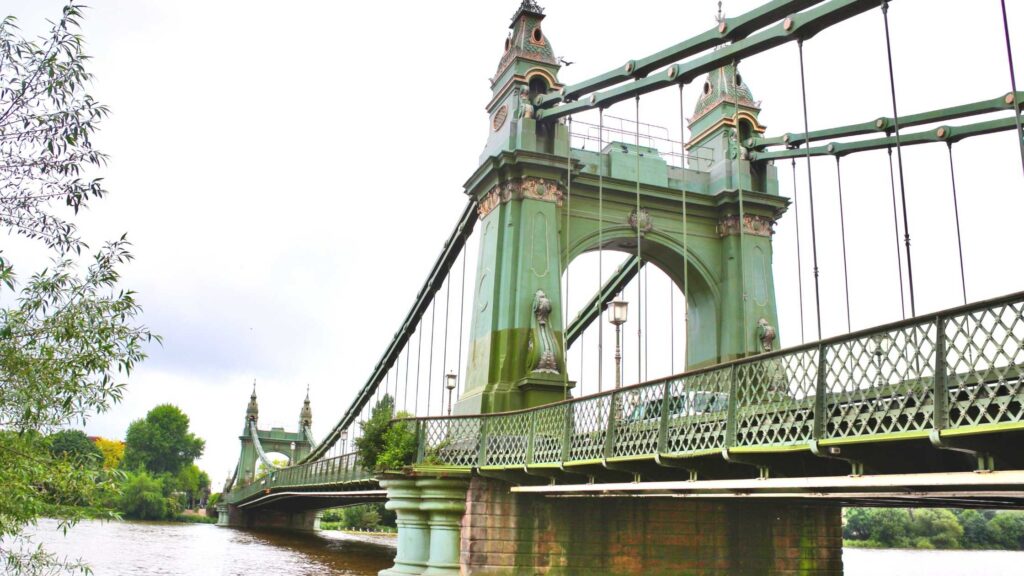 Putney Bridge is another grade 2-listed bridge on the River Thames in West London. The bridge falls between the Hammersmith Bridge and Fulham Railway Bridge. Being a connector of Fulham in the north and Putney in the south, this Arch-styled bridge covered 700 feet by its length and was opened around 292 years ago. The second bridge is comparably new, being opened in 1886. 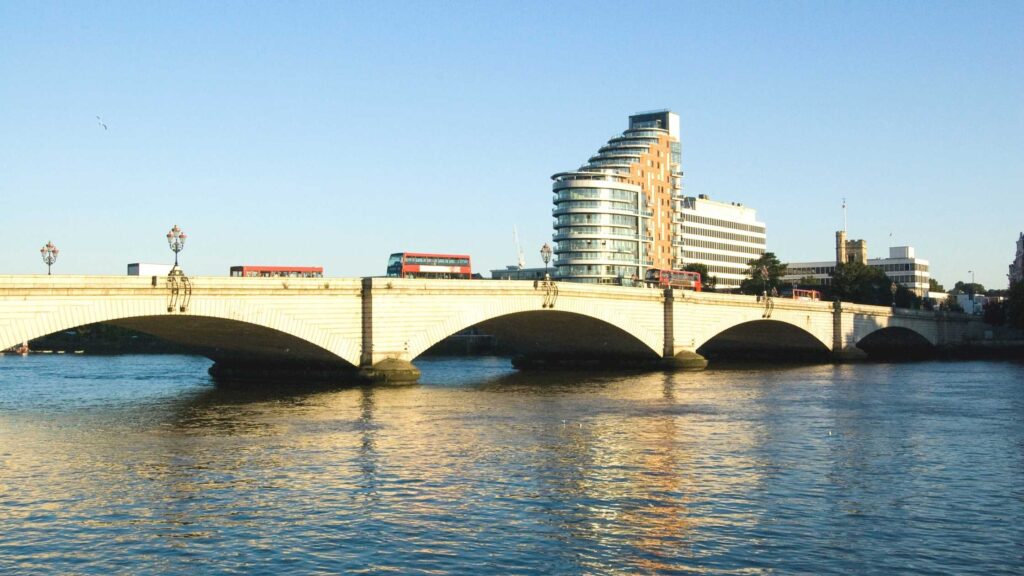 Originated by the hands of Thomas Person Frank in 1873, the Wandsworth Bridge is a cantilever bridge standing over the Thames River. This 650 feet long bridge is made of steel and comes between Fulham Railway Bridge and Battersea Railway Bridge. The bridge is located in Battersea, close to the Wandsworth Town station. One should mention that bridge remains quite busy daily, with over 53,299 vehicles passing through it daily (2004). 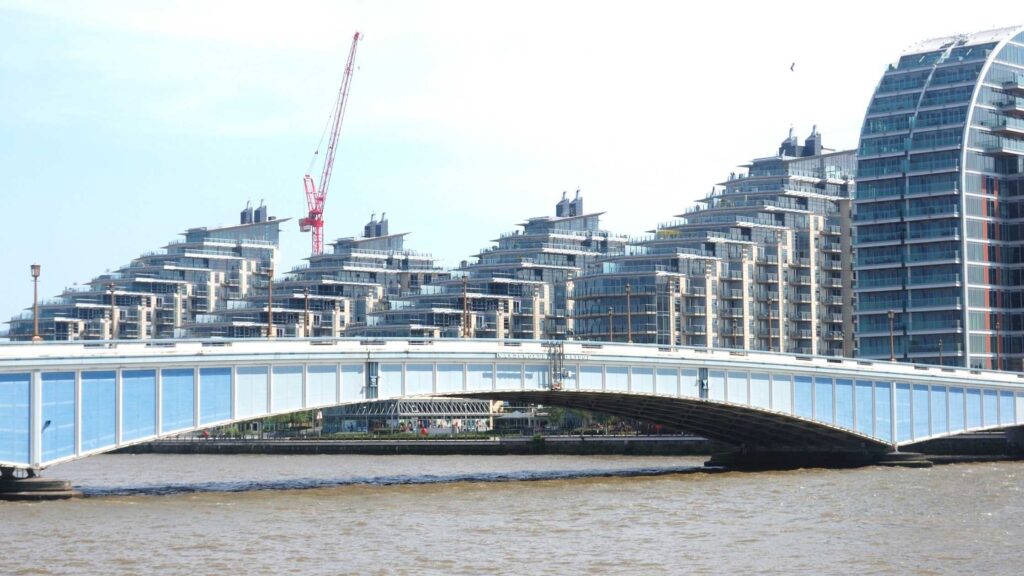 Battersea Bridge is a five-span arch bridge that crosses River Thames to connect Battersea and Chelsea. This bridge, containing the A3220 road, comes next to Albert Bridge and is 725 feet long. In 1890, the bridge came as a replacement for a ferry service. The ferry service had functioned there since the middle of the 16th Century. Battersea bridge is made of granite and cast iron and is a road-and-foot-traffic bridge in nature. If you are in the area be sure to grab a bit at the many amazing brunches in Battersea in addition to the beautiful Battersea Park which sits along the river. 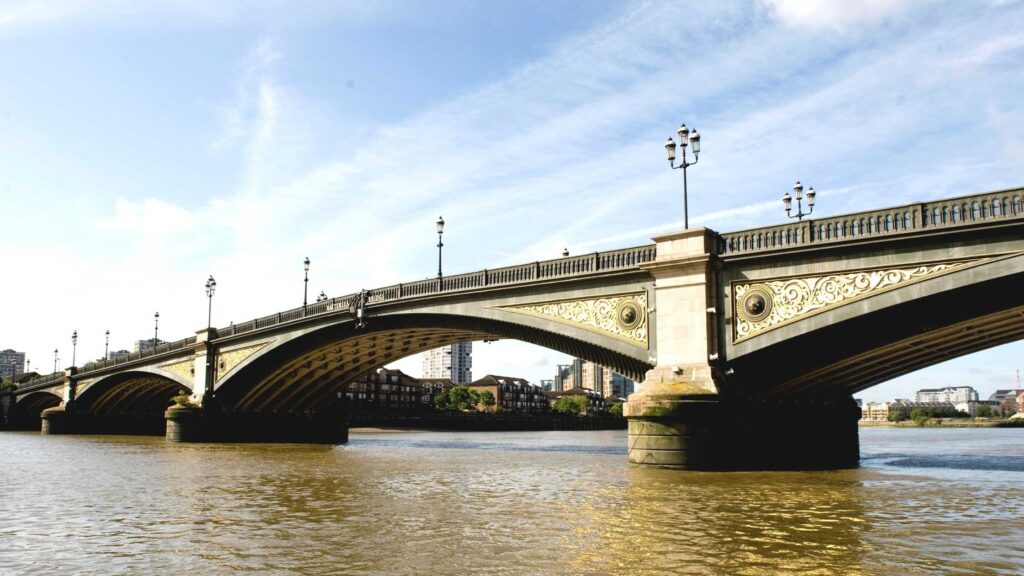 Renowned as the first self-anchoring bridge used for pedestrian and transport in Britain. The designers are EJ Buckton Palmer & Tritton, London and the constructors were the Holloway Brothers. The bridge has a hexagon shape suspended on 37 strands of steel cables — five sets of lampposts grilled with gilded galleons. The bridge is a boundary between Chelsea and Westminster. To experience life in Chelsea be sure to check out these gastro pubs in Chelsea. 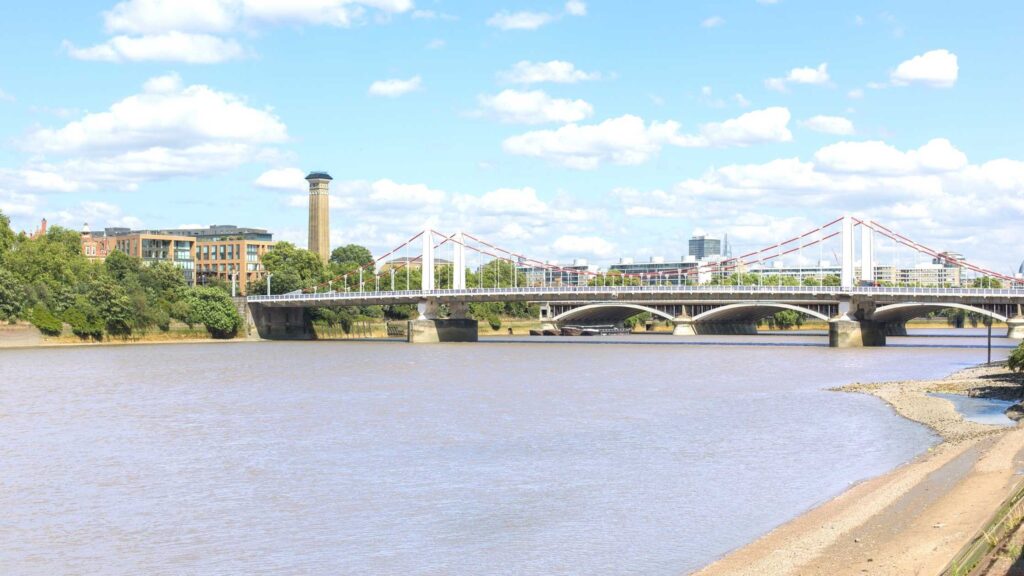 It is the road ferrying people, carriages, and other transport over the River Thames, constructed between the Waterloo and Blackfriars railway bridges. John Birnie Philip sculpted stone carved of water birds showcasing marine life and sea birds. It has similarities with the London bridge, making it attentive to visitors. This whole area is just an amazing location to stay in London with so many cool things to do right at your door stay if you are staying in hotels nearby. 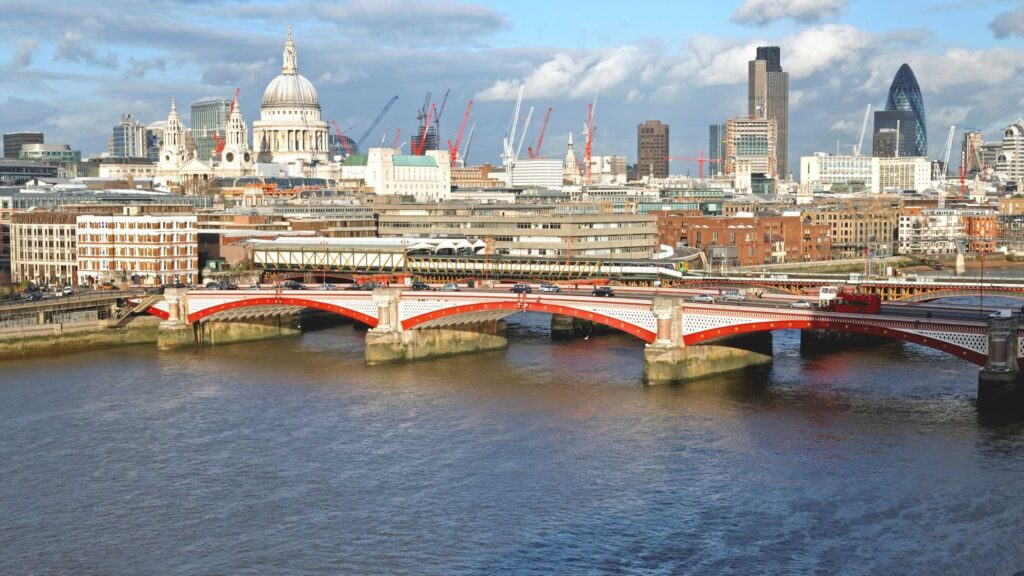 The London Bridge is one of the oldest in London, created in 1894, connecting the city of London with Southwark. It has been a key crossing point ferrying cattle, people, goods, and many more for over 600 years. It was an iconic feature of the city because of its sculptures, with houses, shops, and churches alongside the pedestrians. It is built above the river Thames making the scenic beauty to the visitors. Right next to the bridge you have must-see places like Borough Market, and the Shard which houses the luxury hotel Shangri La, nearby you also have the Sky Garden in addition to only being a few meters from Tower Bridge. 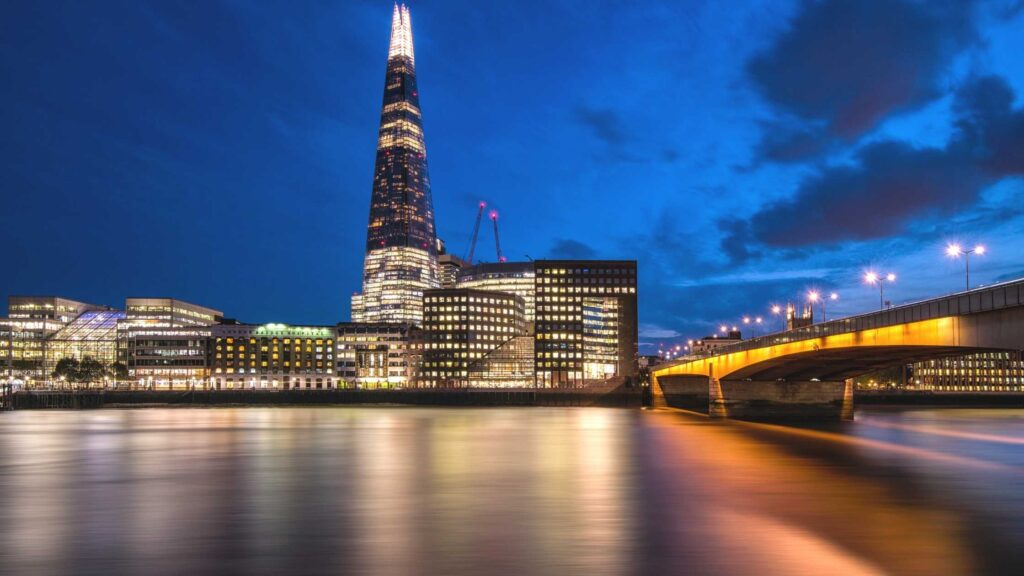 Hungerbridgeford is a railway bridge between Westminster and Waterloo, crossing the Thames. The bridge’s owner is network infrastructure limited, ferrying people and carriages.

Golden jubilee bridge is built with steel and has two pedestrians on the side of the bridge with a footpath and lift access for the convenience of the people. 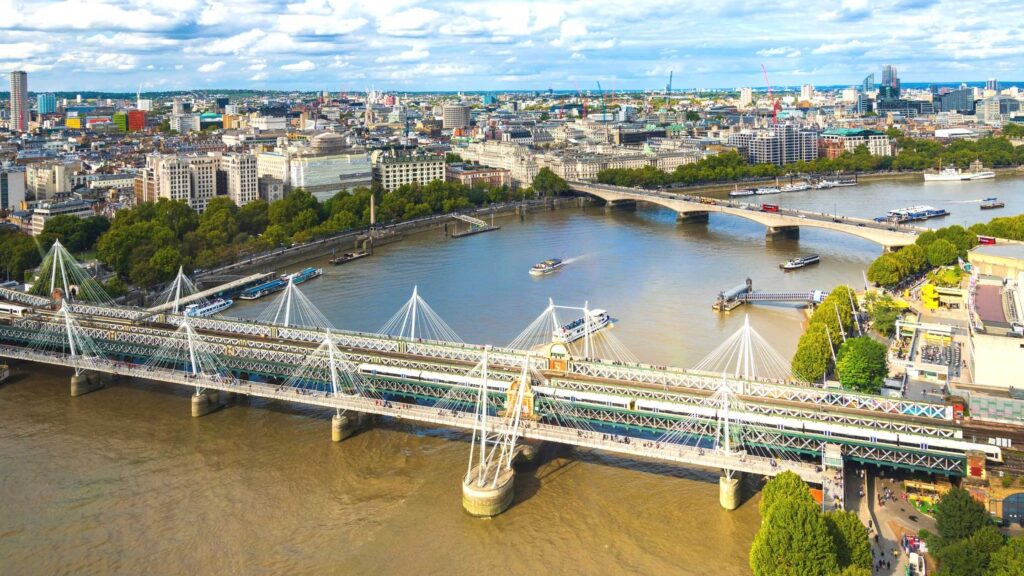 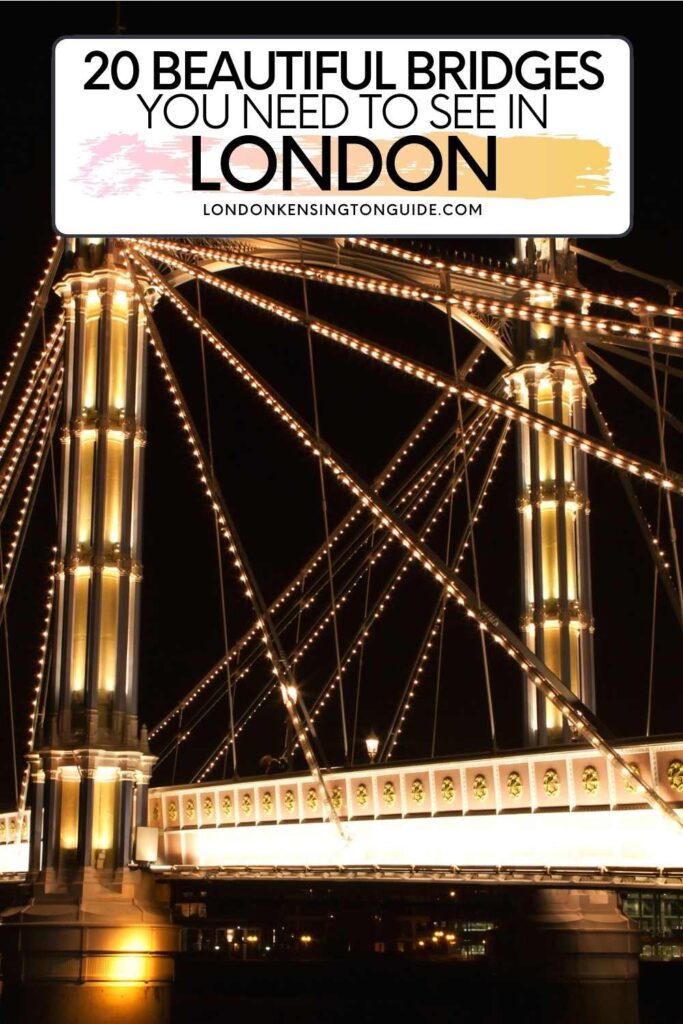 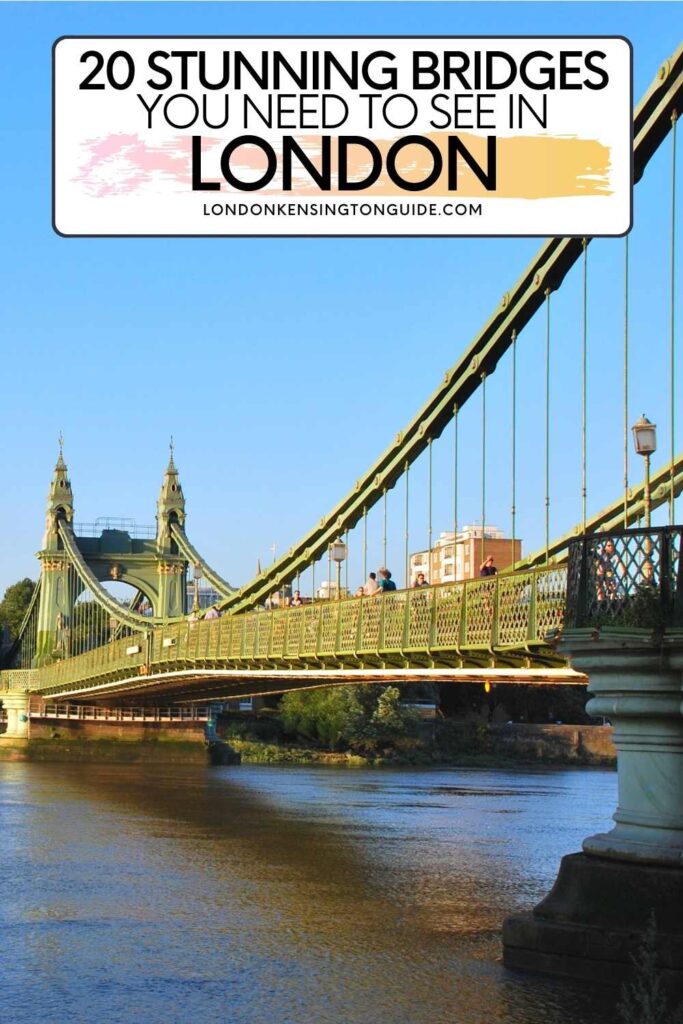 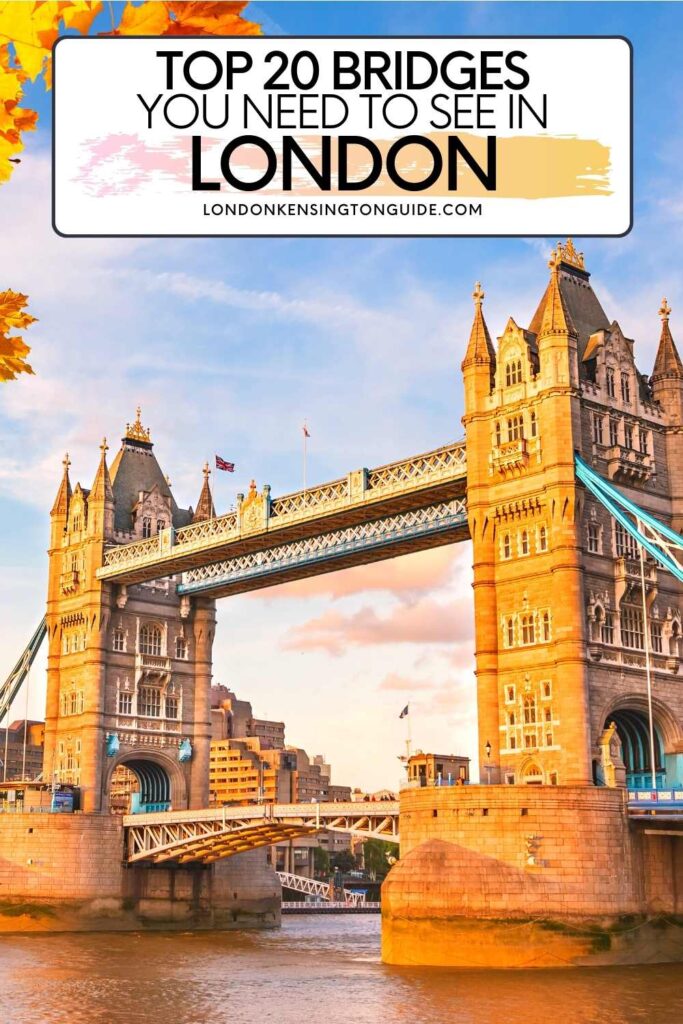 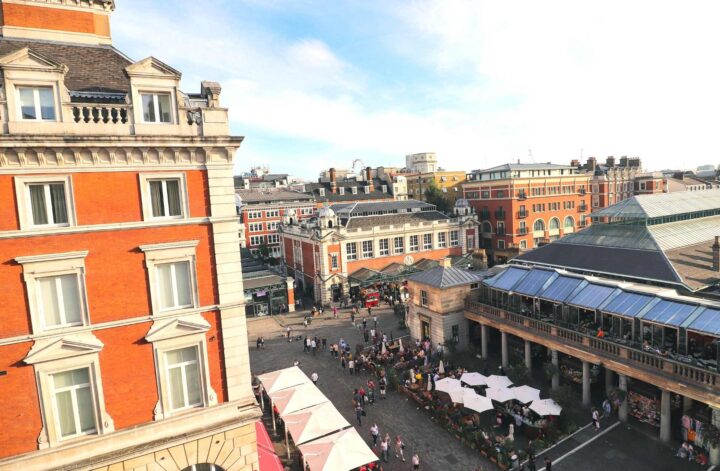 Fun Things To Do In Covent Garden 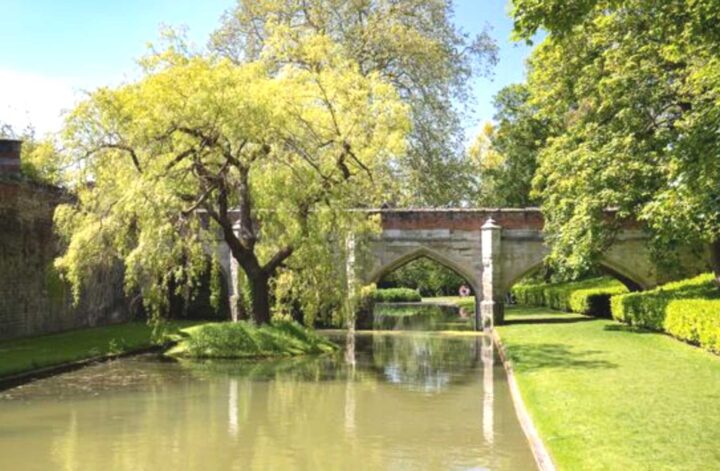 23 Beautiful Gardens In London You Need To Visit 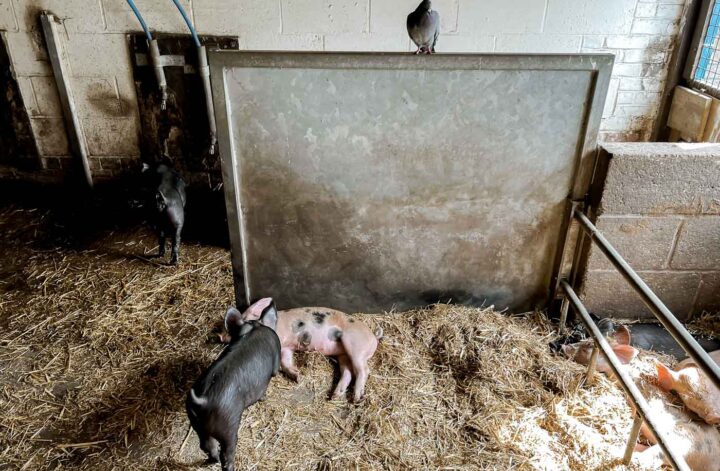