Winchester Palace – A Hidden Gem In The Heart of Southwark 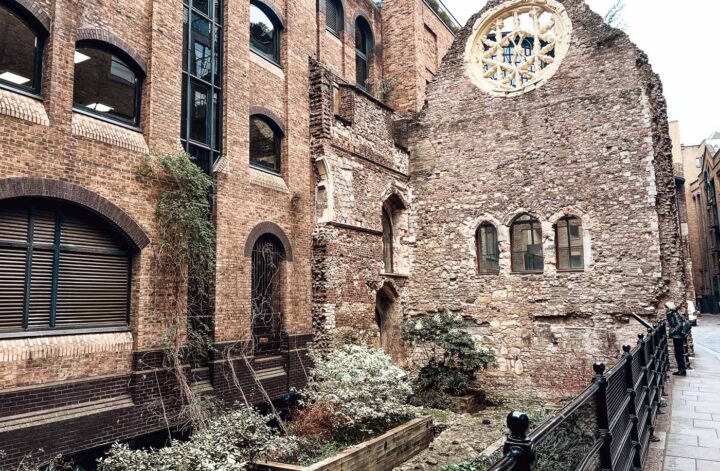 Winchester Palace was reputed as a large and significant construction in medieval London.

Even today, the remnants of the Great Hall and a splendid rose window are evidence of the majestic architecture. 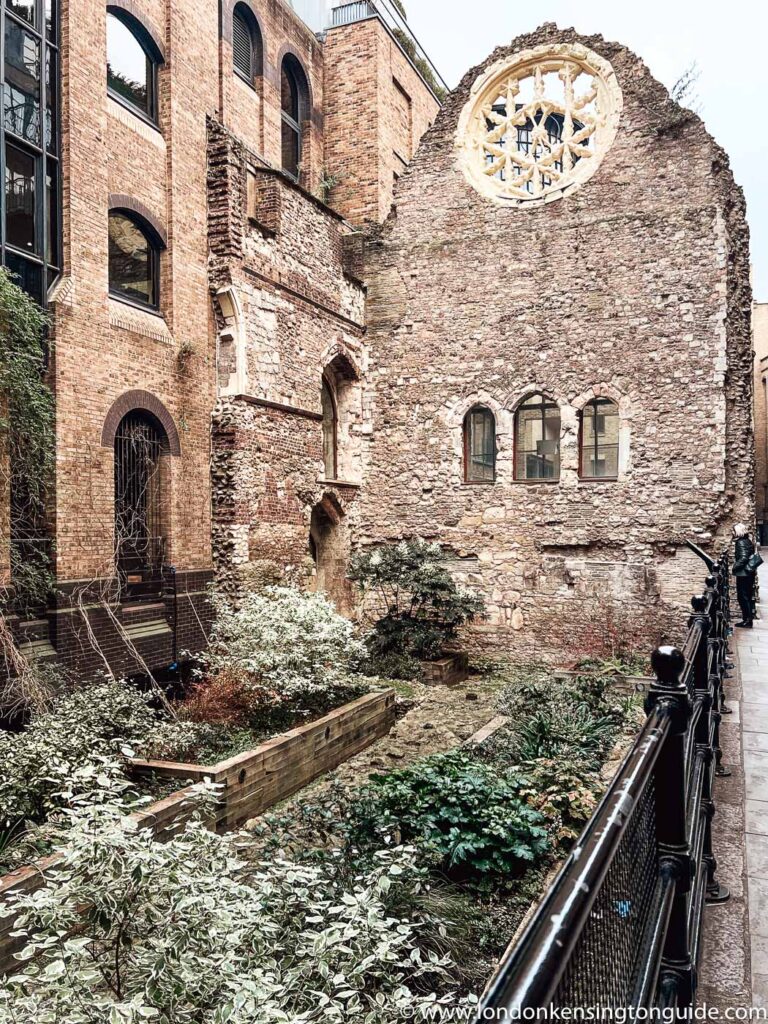 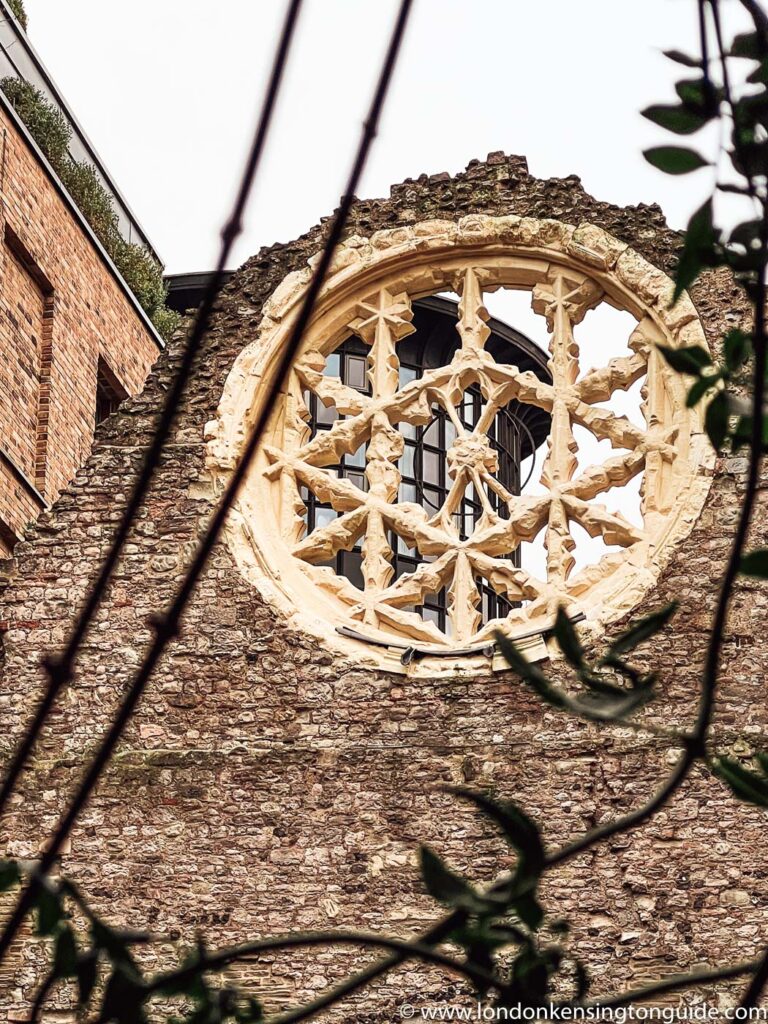 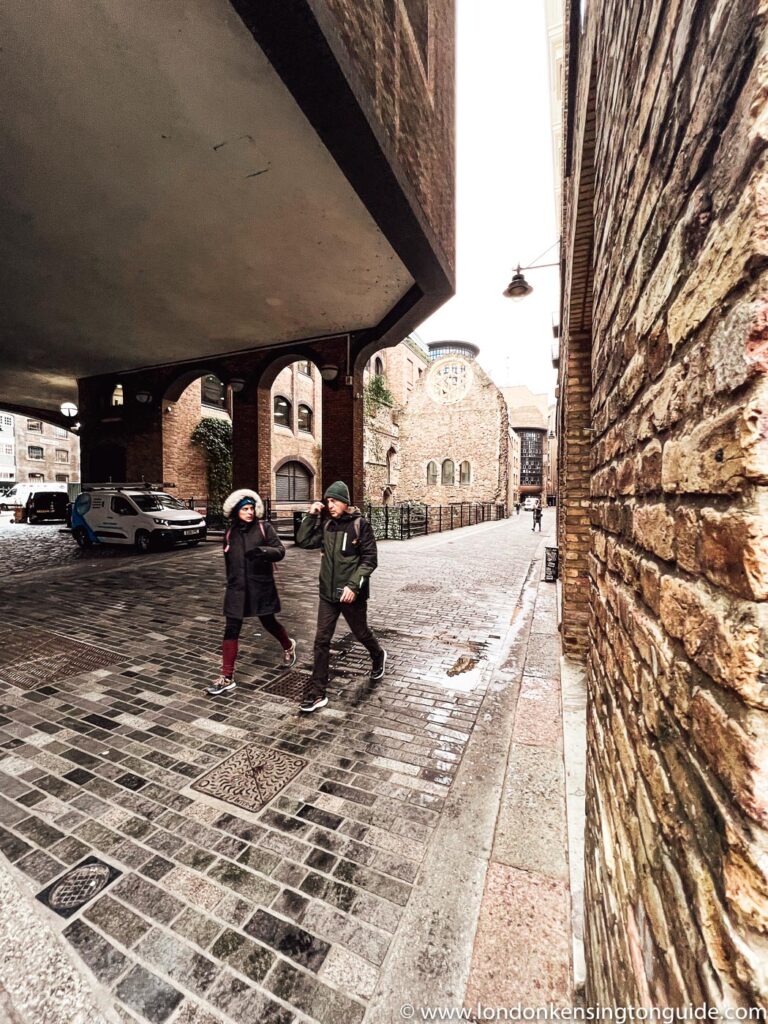 A Little History Of Winchester Palace

Winchester Palace was constructed in the 12th century. The Bishops of Winchester used it as a London townhouse. Its location is in the Southwark parish on River Thames’ south bank, where the current address is Clink Street, just a few meters from The Golden Hinde and  Clink Prison Museum. The Saxon kings of England had Winchester City as their capital city for a considerable duration. Henry of Blois constructed this palace as his high-status and comfortable residence in London.

During 1682 and 1686, this palace was remodeled so that it had a more contemporary Renaissance appearance. For this, the addition of Corinthian pilasters and columns was implemented. Edward Strong the Elder was accountable for the masonry and sculpture.

In the 19th century, another fire took place. After this, the west gable was easily visible with its rose window and a section of the great hall. The popular belief is that this great hall was constructed in approximately 1136.

In the 14th century, Bishop William of Wykeham probably enlarged the hall’s size and constructed the rose window. Underneath this hall existed a richly adorned vaulted cellar that had direct access to a wharf on the Thames River. This was possibly used to procure supplies for the hall.

In 1424, the wedding of Joan Beaufort (niece of Cardinal Henry Beaufort, the then Bishop) with King James I of Scotland took place in this palace. This palace was used for the entertainment of royal visitors. It had two courtyards. The site of this palace also had a butchery, a brewery, and a prison. A bowling alley, a tennis court, and a garden surrounded the palace.

While the Civil War was in progress, Sir Thomas Ogle was in the prison of this palace. He attempted to drag Thomas Devenish into a royal scheme during this time. This scheme aimed to cause a split between the Presbyterians and the Parliamentarian Independents so that there would be some assistance to the numbers of Charles I in the Parliament. Thomas was a member of the Independent Congregation of John Goodwin.

Presently, the English Heritage manages the Winchester Palace. The remains of this palace are mentioned as a Scheduled Monument. 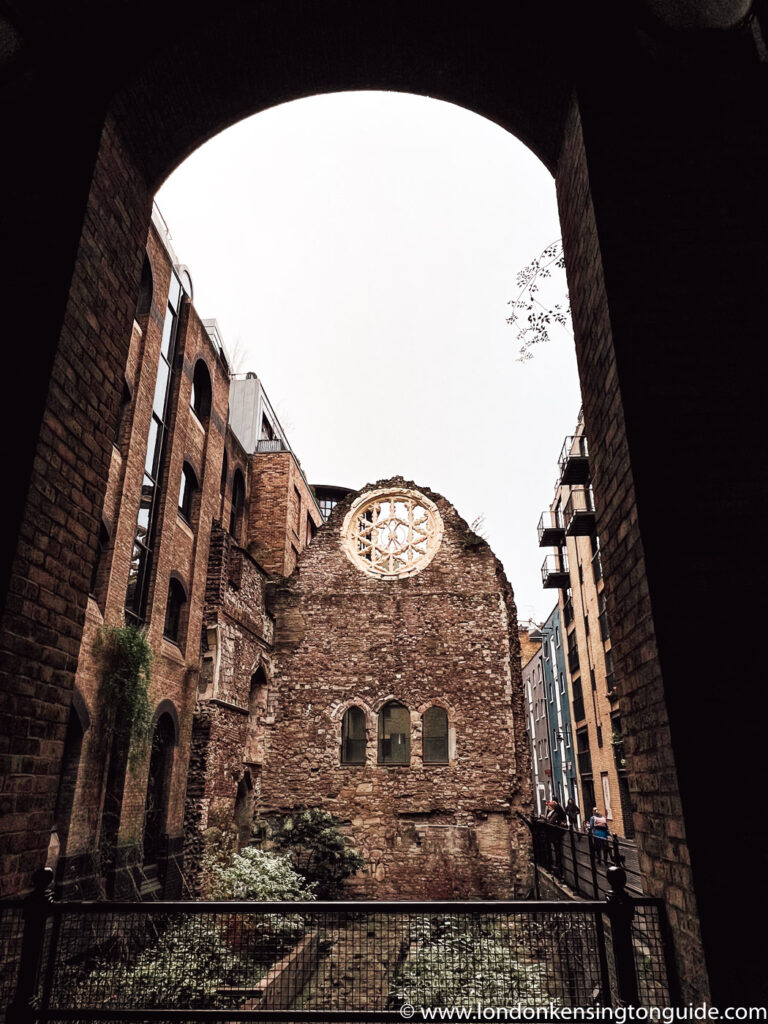 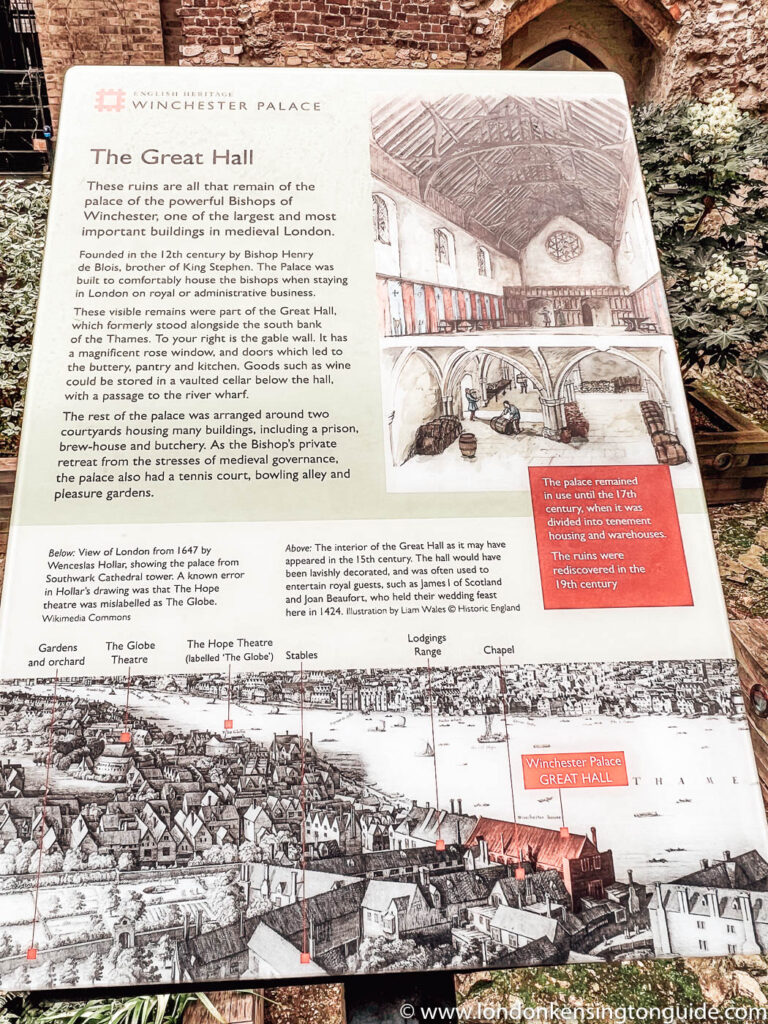 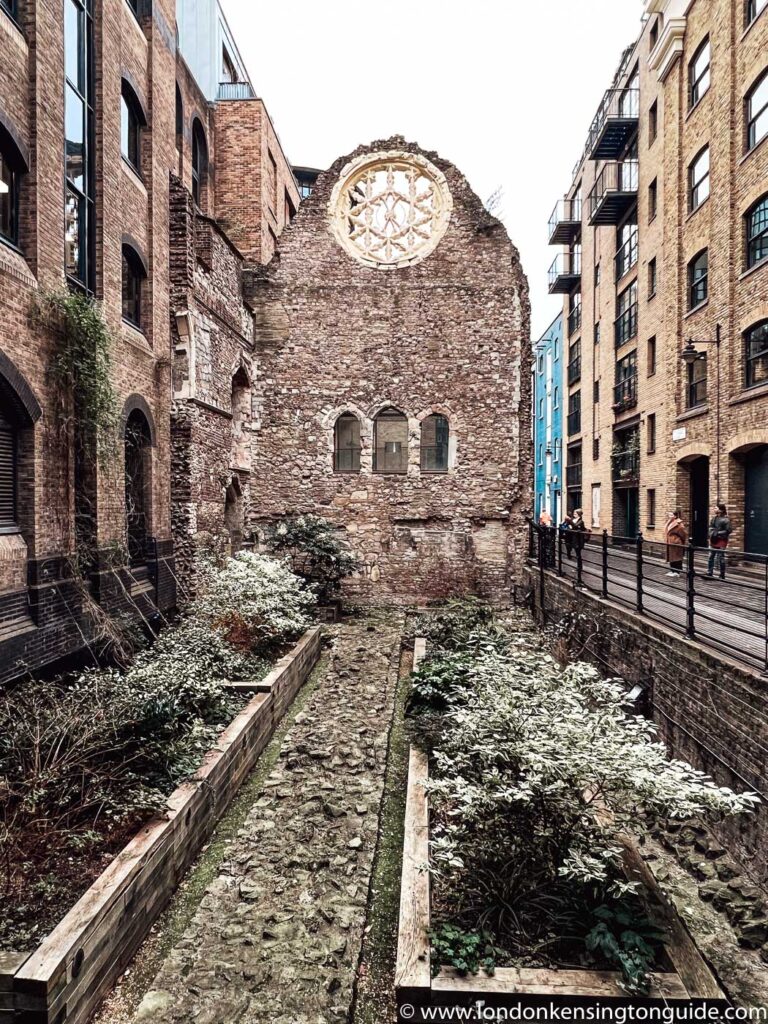 Things To Do Near Winchester Palace

There is plenty to do near Winchester Palace, some of these are included in our list of things to do in London Bridge. Everything from amazing brunch places in London Bridge to Italian, Indian, and pizza places to eat, or if you fancy afternoon tea there are amazing places, some of which offer a stunning view of the city. 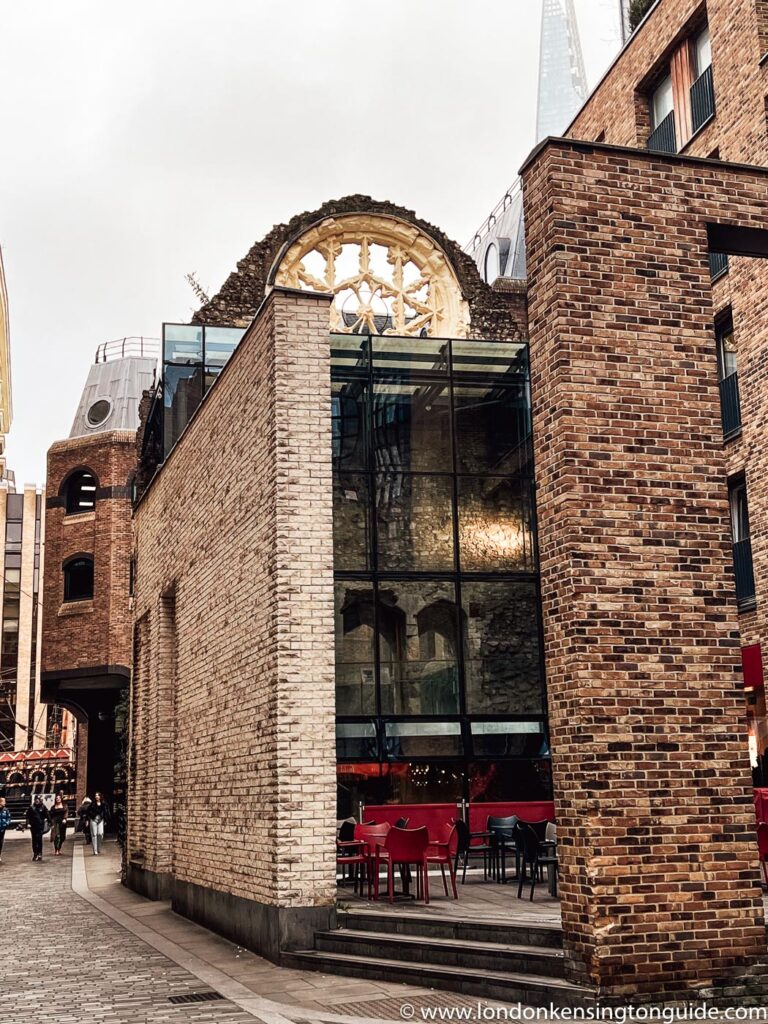 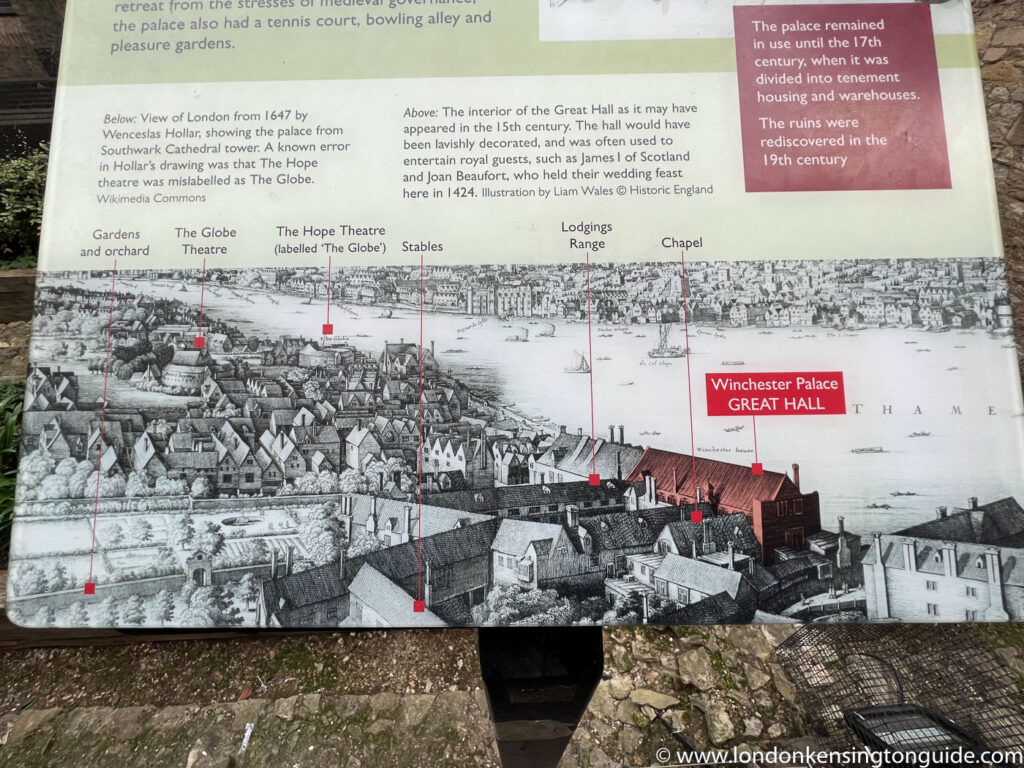 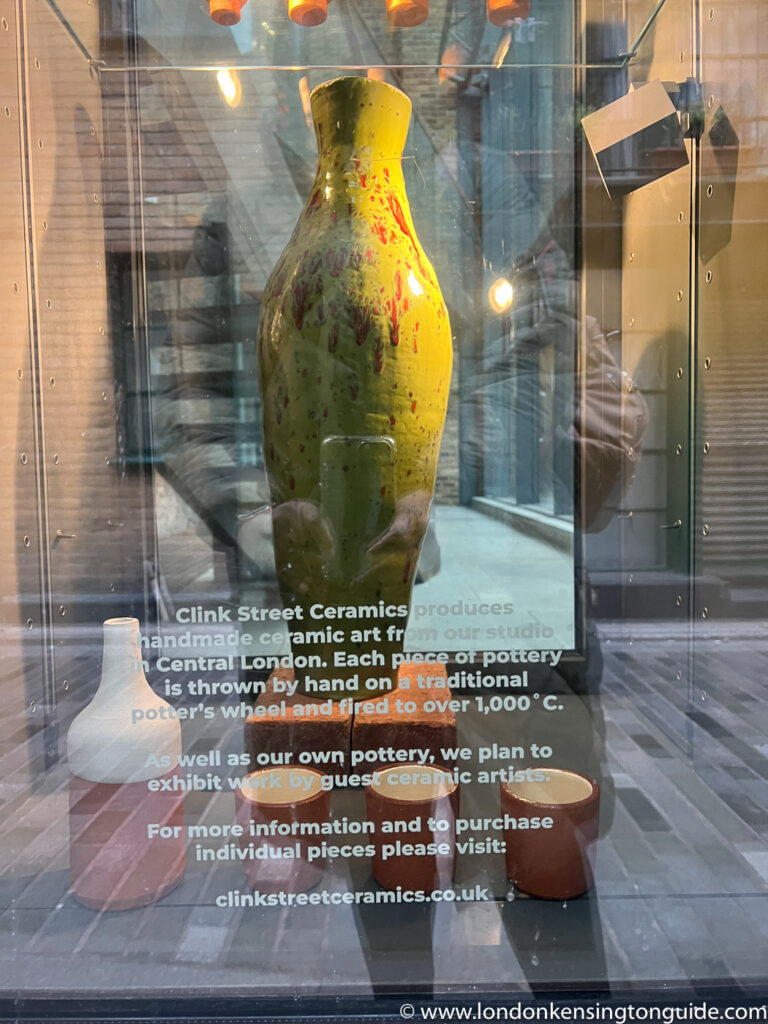 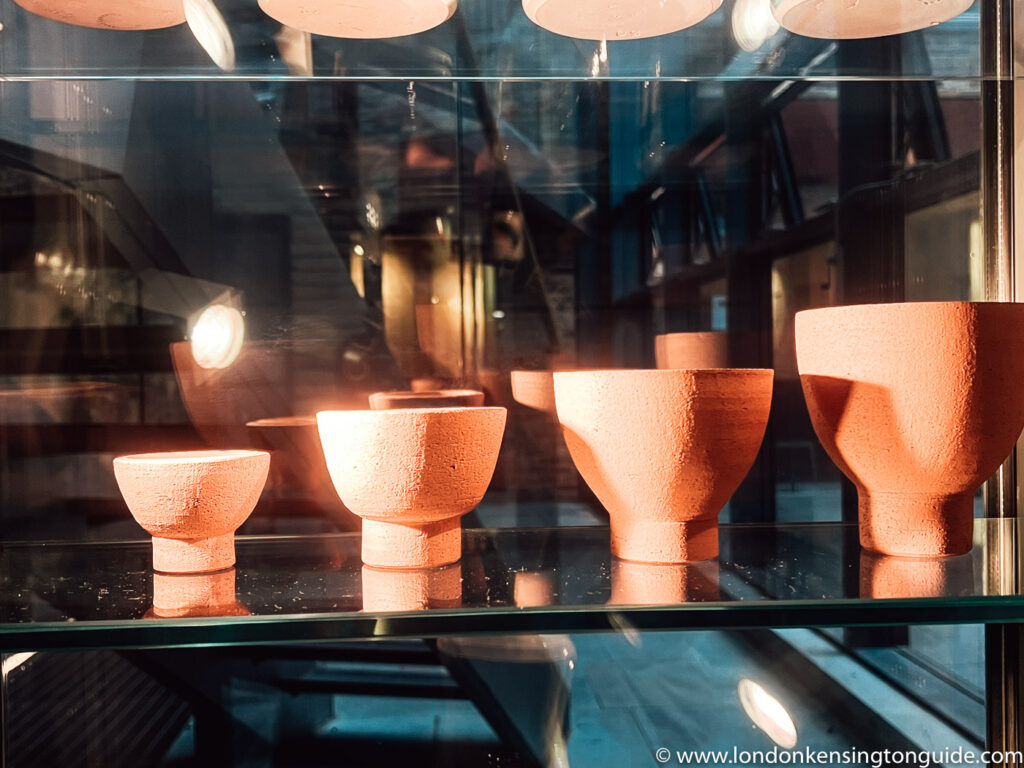 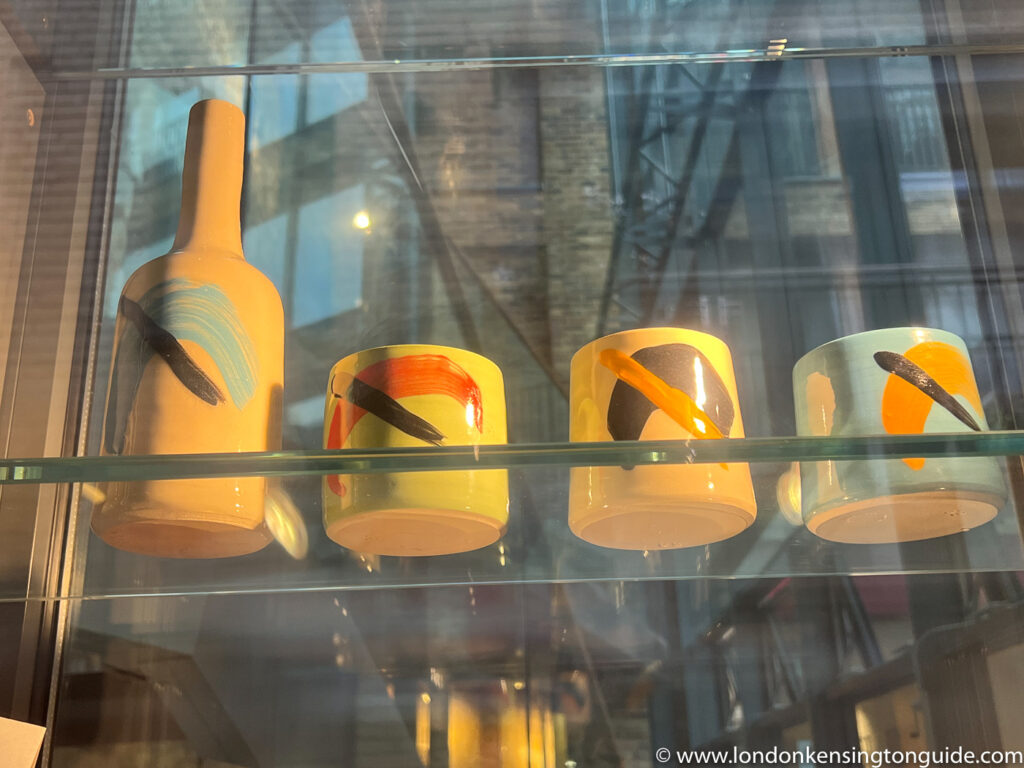 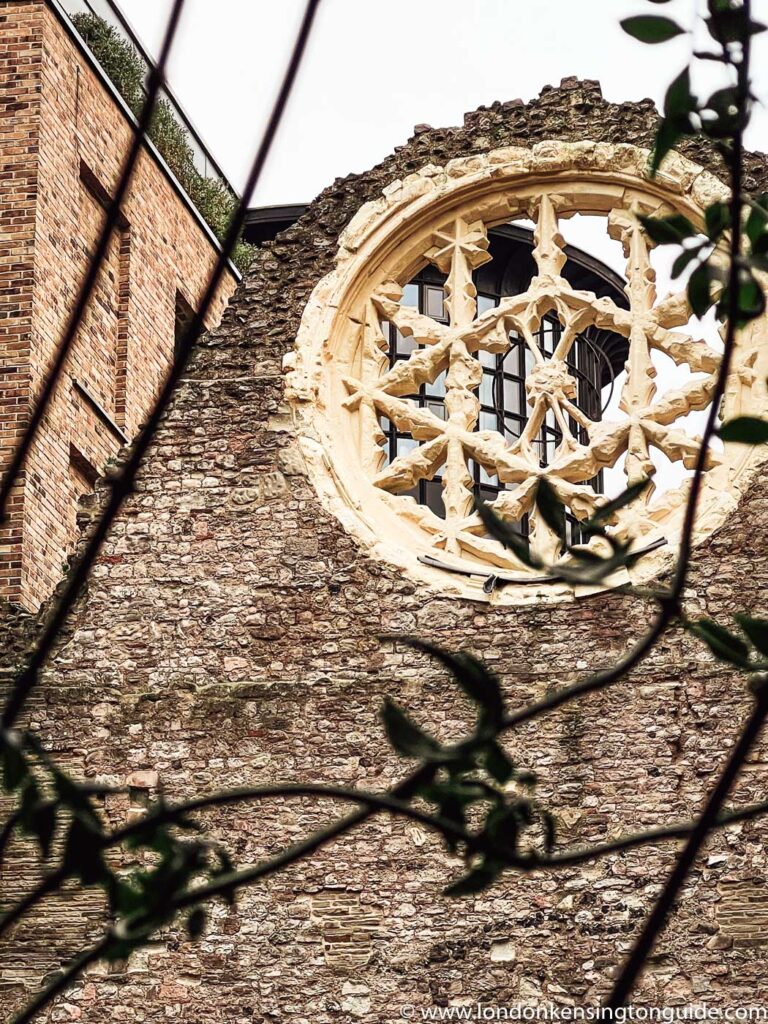 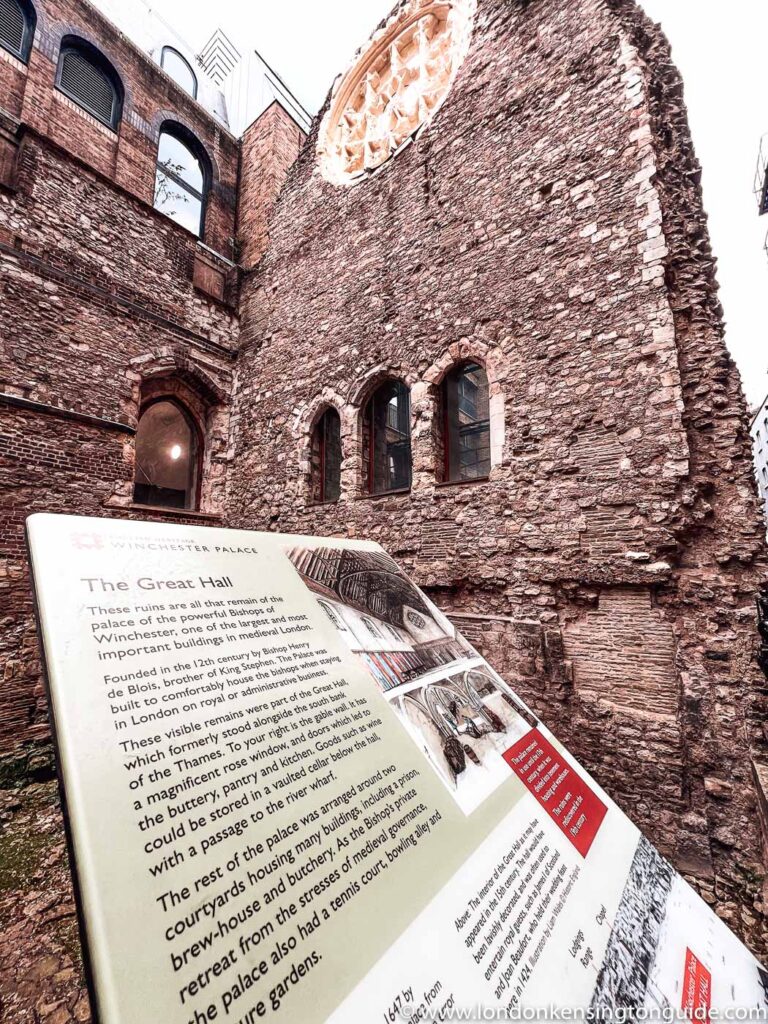 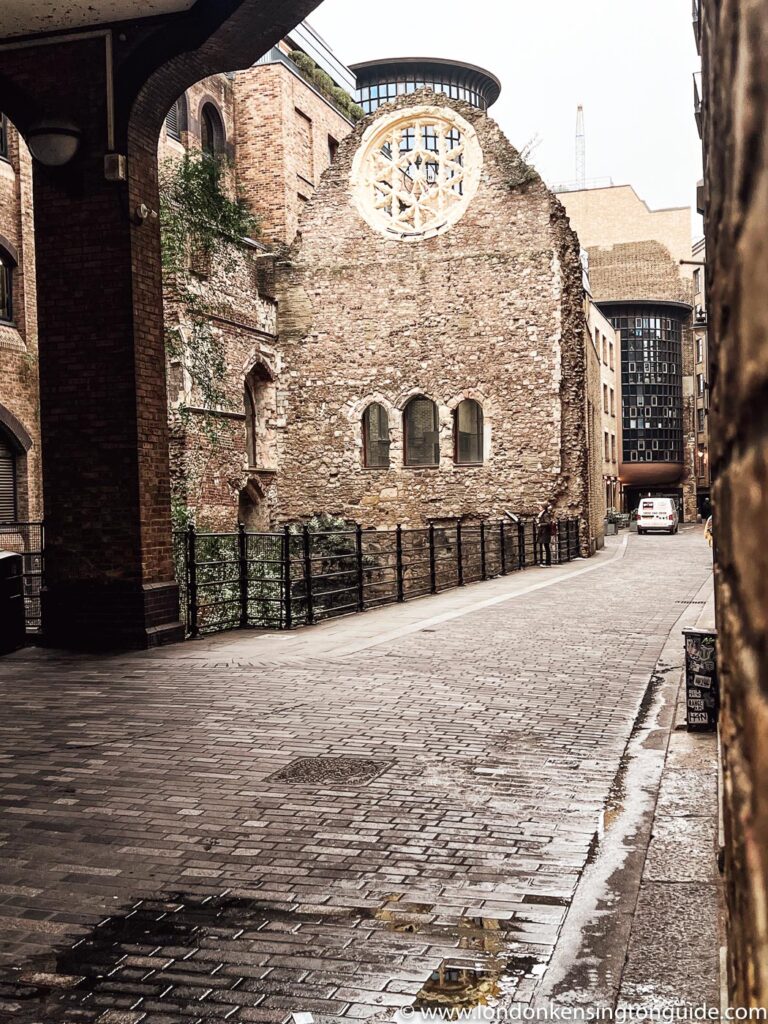 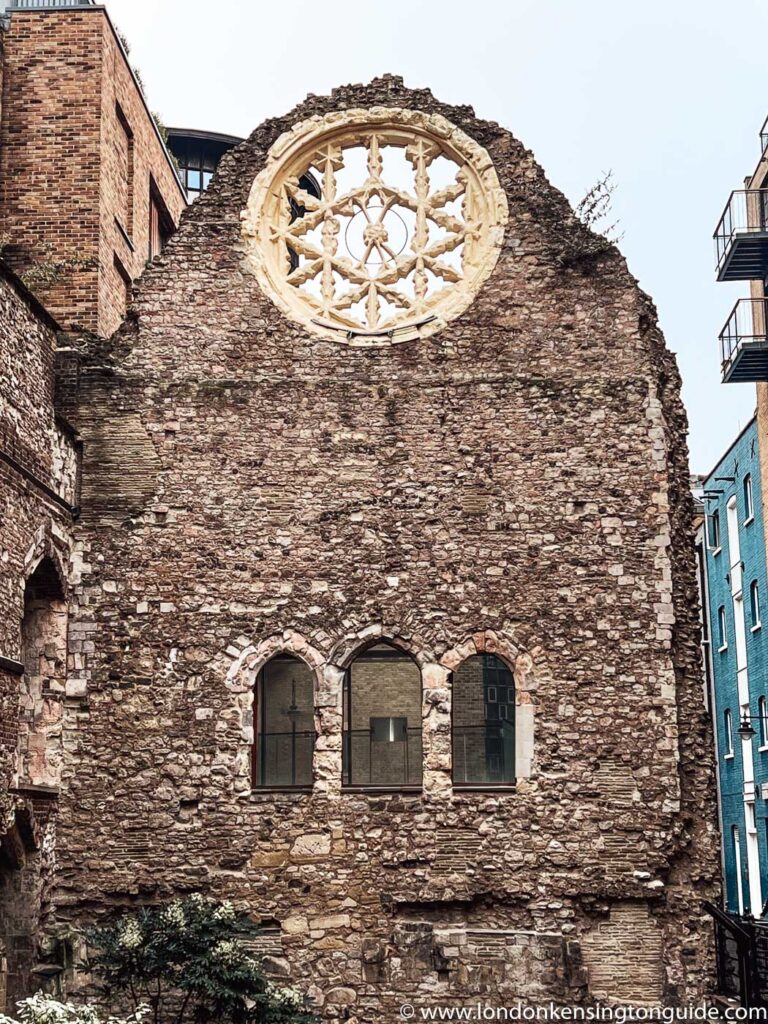 Getting To Winchester Palace

Getting to Winchester Palace is fairly easy. It is a short walk from Borough Market.

The nearest station is London Bridge but you also have access to Blackfriars and  Borough High Street close by as well. See map below for additional guidance. 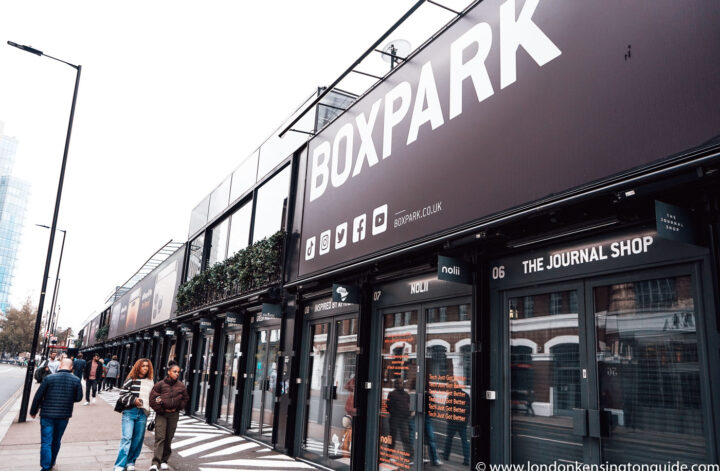 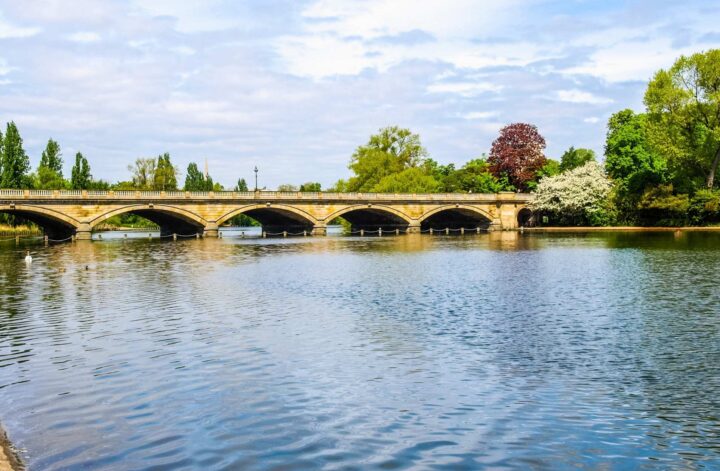 Must See Attractions And Things To Do In Hyde Park